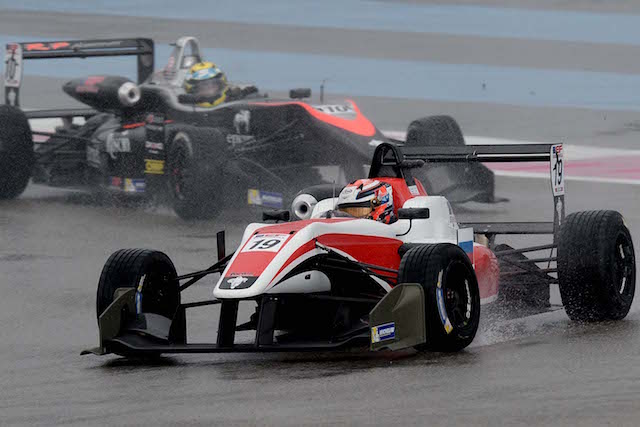 Russian driver Shlom was a late entrant to the event with Fortec Motorsports, but charged from fourth on the grid to win a wet first race which his team-mate and fellow Formula 4 graduate?Jannes Fittje?started from pole.

The race began with three laps behind the safety car due to the conditions, after which Shlom quickly worked his way up into second, passing Scott,?Thiago Vivacqua and?Nikita Troitskiy.

The two Fortec cars charged away up front, but a spin for Fittje enabled Shlom to pass him for the win.

The top six on the grid were reversed for race two with Scott quickly taking the lead from third place.

The three-time Eurocup Formula Renault race-winner made his debut in the series at Jerez last year for Teo Martin Motorsport but had turned out with RP Motorsport at Paul Ricard.

He finished up 4.3 seconds clear of second-placed Drivex racer Troitskiy with Vivacqua close behind in?third for Campos Racing.

While Shlom was forced to retire after early contact, Fittje finished a more distant?fourth in front of the Carlin duo of?Ameya Vaidyanathan and DeFrancesco.

The Euroformula Open Winter Series began with collective tests at Barcelona last month and will conclude with more testing at Jerez later on March 21-22.