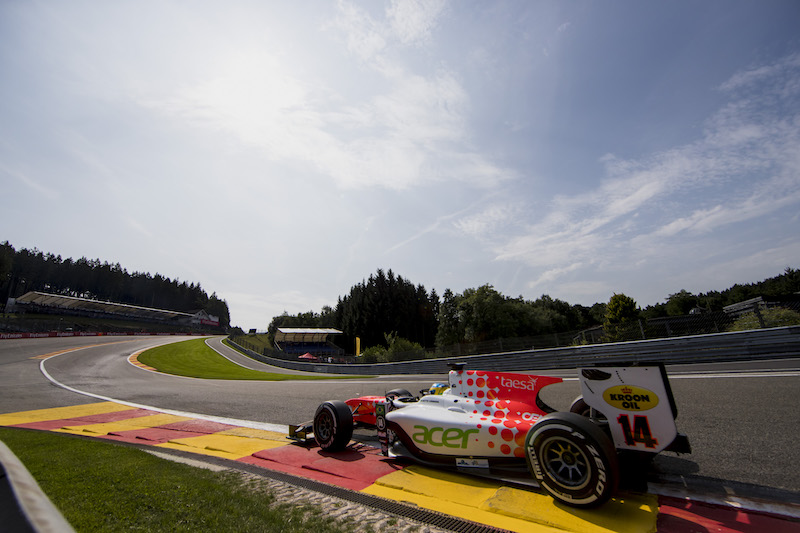 A fast-starting Sergio Sette Camara scored his first car racing win in the Formula 2 sprint race at Spa-Francorchamps, as Charles Leclerc came from 19th on the grid to finish fifth.

Sette Camara ended Saturday’s feature race set for pole position on the reversed-grid, but the exclusion of Leclerc and Oliver Rowland promoted him to sixth in the results, putting him third on the race two grid behind Norman Nato and Roberto Merhi.

He almost immediately took the lead after the start however, shooting between the front row men after a superb getaway.

Fellow second-row starter Nyck de Vries dived to the inside of Nato at La Source, and completed the move into Les Combes.

Sette Camara soon built a one-second margin over de Vries however, and had doubled that before the safety car came out on lap 15 of 18 after a huge shunt for Nobuharu Matsushita at Raidillon.

Matsushita was in the slipstream of Gustav Malja over he crest when his car let go, sending him hard into the barriers on the right-hand side. With his car absorbing the impact side-on,?Matsushita was able to immediately climb out of the wreckage.

The clean-up was almost completed in time for one final lap of racing, but 19-year-old Sette Camara ultimately did not have to worry about a restart.

De Vries took his fifth F2 podium on his first weekend with Racing Engineering, while Luca Ghiotto completed a fine double podium from seventh on the grid having passed Nato into Les Combes just prior to the safety car.

After his dominant performance on track on Saturday, all eyes were on Leclerc from the back of the grid.

He got up to 14th on the first lap, two places behind rival Oliver Rowland, who actually started last – although Leclerc then passed Matsushita in Eau Rouge on lap two.

At the end of that lap he dived past Rowland on the outside into the Bus Stop, and although the Briton responded at La Source, Rowland was able to draft back ahead down the Kemmel Straight.

By lap six he was up into the points in eighth, and soon onto the tail of his Prema team-mate Antonio Fuoco, who in turn was chasing Artem Markelov.

Fuoco completed a superb move around the outside of?Markelov at Blanchimont, only to find himself losing out to both the Russian and Leclerc down the Kemmel Straight on the next lap.

A couple of laps later, Leclerc made what looked like an outstanding move on Markelov around the outside exiting Pouhon, but Markelov then slowed and retired with an engine issue.

Now sixth, Leclerc passed one further driver before the finish, taking Roberto Merhi at Les Combes on lap 14, having gone deep in his attempts to pass the Spaniard on the previous tour.

Rowland also made it into the points in eighth behind Fuoco and just ahead of his DAMS team-mate Nicholas Latifi, who also had to come from the back after an engine failure stopped him from even starting the feature race.