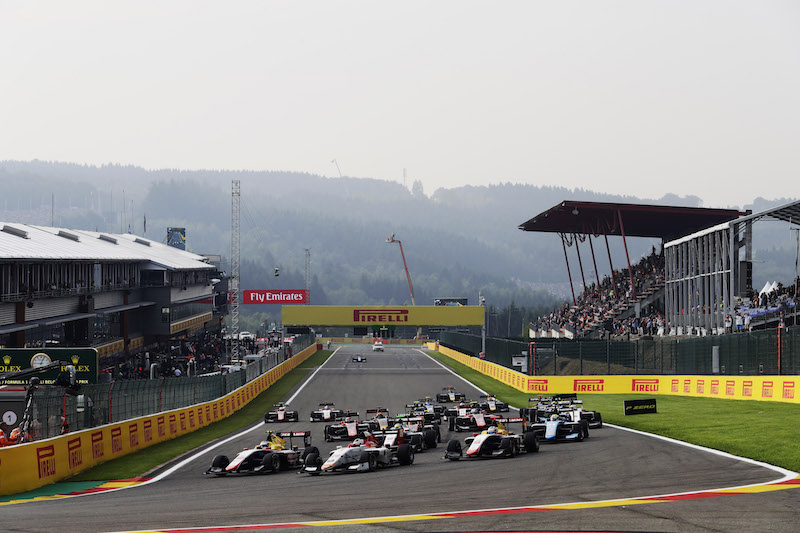 Starting second on the grid, Alesi managed to take the lead from Julien Falchero before the first corner, and then kept it on the long run to Les Combes.

Race one winner Russell meanwhile remained in eighth place on the first lap – getting ahead of team-mate Nirei Fukuzumi but losing out to Niko Kari.

His rival Jack Aitken did well early on to get up from seventh to fifth, but on lap three he made contact with Dorian Boccolacci as he passed the Frenchman for fourth down the Kemmel Straight.

The contact damaged Boccolacci’s front wing and gave Aitken a puncture. He initially got out of the car in pit lane, but then returned to the track and received a 10-second time penalty rather than a grid penalty for Monza.

After he had passed Arjun Maini, this gave fifth to Russell, and he took Kari for fourth on lap five, as well as taking 1.4s out of a 5s deficit to the leader.

He quickly caught and passed Falchero and then Tveter, and was 2.7s away from Alesi with four laps remaining.

Russell was unable to really eat into that gap however, with Alesi actually extending his advantage on the final lap to 3.3s.

Fukuzumi came on a late charge to get fourth behind Tveter, passing Maini and then Kari, who forced him onto the grass. The Japanese racer then swept past Falchero on the last lap despite having no uses of DRS remaining.

Kari was handed a five-second penalty for his failed defence, relegating him outside of the points to ninth.

Anthoine Hubert came from near the back of the grid after his race one retirement to finish seventh on the tail of Maini, with Jorg eighth.