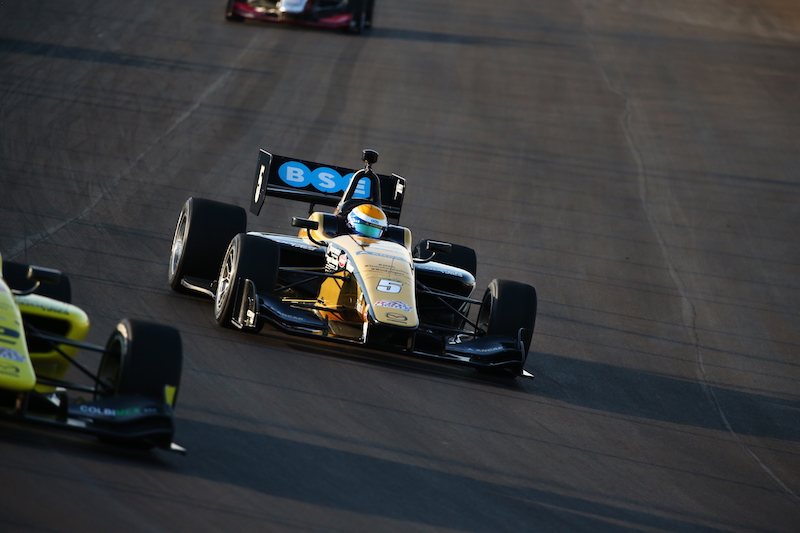 Santiago Urrutia won on Indy Lights’ return to Gateway Motorsports Park with a late pass to deny Juan Piedrahita, but he couldn’t prevent Kyle Kaiser getting one hand on the series crown.

Piedrahita, still searching for his first Mazda Road to Indy win, took his first pole in qualifying, with Urrutia lining up in second and Nico Jamin and Ryan Norman just behind.

Championship leader Kaiser started fifth but was already up to third by the time the cars entered the back straight. There was going to be a change of the lead at the end of the lap too before Belardi Auto Racing team-mates Shelby Blackstock and Aaron Telitz collided at Turn 4 and a spin by Carlin?s Neil Alberico span caused the first caution period of the race.

When racing resumed on lap 6 there were more spinners on the super smooth track surface, requiring a second restart.

Urrutia failed to challenge Piedrahita this time round, and was actually overtaken by Kaiser around the outside of Turn 1.

On Lap 15 Urrutia reclaimed second, and finally got close enough to put a move on Piedrahita for the lead on Lap 44.

During that period Carlin?s Matheus Leist, who has earned a reputation as an oval specialist this season, was moving up the field, and was on the tail of Kaiser and Jamin in the battle for third.

Jamin put in his move on Kaiser first, taking the inside line at Turn 3, and Leist did the same a lap later.

Kaiser almost immediately lost another spot to Colton Herta, but the Andretti driver?s attack was halted when Zachary Claman DeMelo dived down the inside at Turn 1 and stole sixth place.

Six laps later DeMelo demoted Kaiser, and the championship leader had Herta in his mirrors once again.

Up front Urrutia was rapid, and was stretching his lead before the third caution of the day occurred.

Neil Alberico had failed to give Indy Lights debutant Chad Boat room on the inside, clipped the Belardi Auto Racing driver and bounced up the track into the outer wall. The slowing Boat was then rear ended by Garth Rickards, causing another caution period and eradicating Urrutia?s lead.

The race was then red flagged, and on the restart Jamin span, prompting some incredible reaction speeds from those behind him and another caution period.

Piedrahita had passed Urrutia for the lead at Turn 1 and because he did so before the yellows were waved he kept the lead for the restart.

It only took till Turn 3 for Urrutia to reclaim the lead, but superior drive onto the front straight meant he was alongside as they crossed the line with two laps to go.

The outside line proved too difficult to overtake on though and Urrutia crossed the line for his second win of the season and sixth of his career.

Piedrahita, who has been racing on the MRTI ladder since 2010, finished a career-best second, with Herta taking third having made it past Kaiser prior to the red flag.

Leist was in third prior to the last restart but had to pit because of a puncture just before racing restarted, elevating Nicolas Dapero to a career-best fifth.

Fourth place for Kaiser means he heads to the final race at Watkins Glen this weekend with a 31-point championship lead over Urrutia, with 33 available, and therefore only needs to start to seal the title.