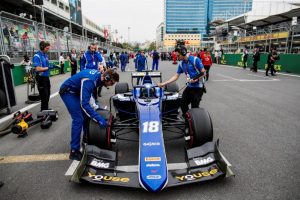 Sergio Sette Camara has been disqualified from second place in the Formula 2 sprint race in Baku after finishing the race without the required amount of fuel for a sample.

A 0.8kg sample from each car is taken in scrutineering at the end of every race as part of the post-race technical checks.

Sette Camara stopped on track on the way back to the pits after the race, having not saved enough fuel for either that task or the required sample.

His disqualification moves all other drivers up one place in the race result, with Prema’s Nyck de Vries and DAMS driver Nicholas Latifi inheriting the bottom spots on the podium behind race winner George Russell.

Ralph Boschung continued his scoring run by taking the final point in eighth.

The championship ramification is that Sette Camara’s Carlin team-mate Lando Norris now has a 14 point lead at the top of the standings over Baku feature race winner Alexander Albon. Sette Camara is now third, and was only one point behind his team-mate prior to the disqualification.