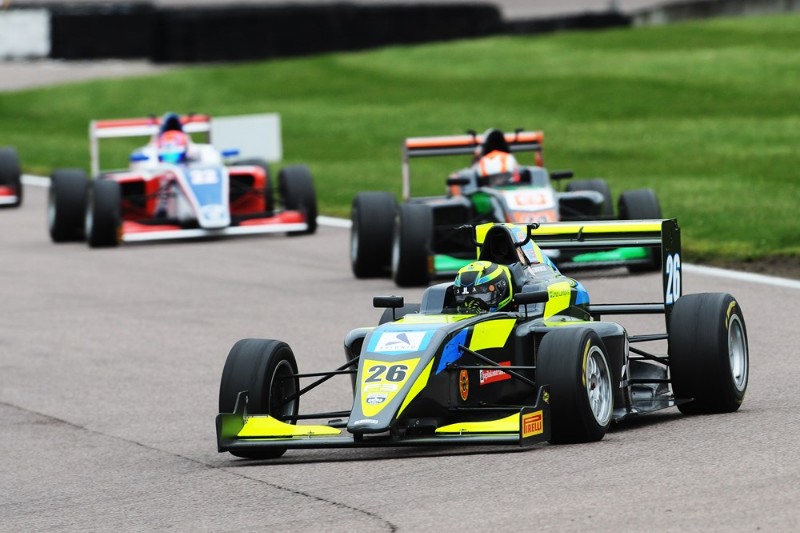 Victory in the third race at Rockingham put Linus Lundqivst at the top of the BRDC British Formula 3 points for the first time since the opening race of the season.

Lundqvist, Nicolai Kjaergaard and Kush Maini, the three stars of the weekend, fought hard over the win in the closing race of the weekend, and it was Lundqivst who triumphed, becoming the first double winner of 2018 in the proccess.

Maini started the race from pole, thanks to setting the fastest lap on way to victory in the previous race, but lost the lead at the start to Lundqvist, who started third on the grid.

Kjaergaard also made it past, and was getting dicey with title rival Lundqvist before the safety car was called out due to seperate incidents for Arvin Esmaeili, Jamie Chadwick and Pavan Ravishankar.

The front two resumed their duel when the race went green again, with Billy Monger almost taking third from Maini before being shuffled down to sixth at the Deene hairpin.

The lead battle remained close, although Lundqvist did give himself a few extra tenths of breathing room at some points, and all previous gaps were eradicated when the safety car was required to remove Jusuf Owega’s stranded car at Tarzan.

Three laps were left after that, and Kjaergaard got alongside Lundqvist on more than one occasion during that time. He couldn’t find a way through and crossed the line in second, a quarter of a second behind Lundqvist and almost four tenths ahead of Maini.

Monger found his way back up to fourth, but made contact with race one winner Tom Gamble on the penultimate lap that put him out of the race. Gamble therefore took fourth, ahead of the battling trio of Manuel Maldonado, Jordan Cane and Clement Novalak.

Earlier in the day Maini had triumphed in the reversed grid race, which awards points for positions gained.

Maini leapt from fifth to the lead on the first lap, and was then unchallenged on the way to his first win in car racing.

Kjergaard rose from 13th, due to retiring in the first race, to finish second. His first lap was even more impressive than Maini’s, taking him up to fifth, and he was in second place the lap after that.

Lundqvist picked off Chadwick on the last lap to take third, with the latter then being demoted to 10th due to a track limits penalty.

Krishnaraaj Mahadik in herited her position, ahead of Gamble, Maldonado, Monger, another to be penalised, and Cane.