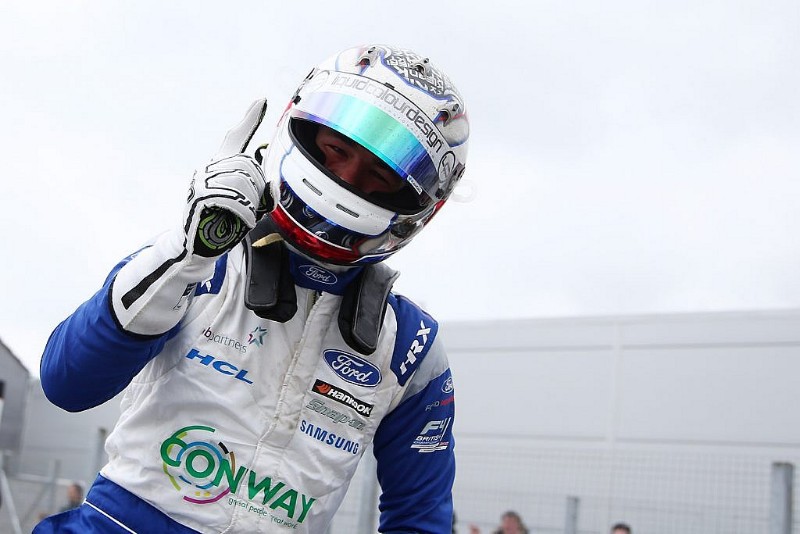 Kiern Jewiss closed in on the British Formula 4 championship lead with a win and a third in the two Sunday races at Donington Park.

Retirement in the first race meant Jewiss started the second race of the weekend from the last row on the grid.

An incredible first lap lifted the Double R Racing driver to sixth, and in the first third of the race he picked off another two drivers to join the four car battle for the lead.

Hampus Ericsson had started the race from pole, but was quickly overcome by Dennis Hauger and later lost a spot to championship leader Ayrton Simmons.

Jewiss’s move was the most impressive of the three, going around the outside of Ericsson through the long right hander at Coppice.

He then hunted down and overtook Simmons, who technically had held the race lead as Hauger had a five second penalty for exceeding track limits hanging over him.

Hauger crossed the line in first, but with only a second between himself and Jewiss it was the latter who took a deserved first victory in the championship.

Simmons took second, with Hauger completing the podium after the penalty was applied. Huager’s Red Bull Junior Team stablemate and Arden team-mate Jack Doohan was just over a tenth back in fourth.

Race one winner Johnathan Hoggard finished an untroubled fifth, with Seb Priaulx also having a lonely run to sixth.

Paavo Tonteri, who shared the back row of the grid with Jewiss, stole seventh place from Patrik Pasma at the finish line by a margin of 0.001 seconds.

Sebastian Alvarez and Josh Skelton were ninth and tenth.

Hoggard stole the headlines in the final race of the weekend with a dominant win, but it was Jewiss who once again provided most of the excitement.

Pasma started from pole, but lost the lead almost straight away to Hoggard.

Several crashes on the first lap led to the safety car being called out, and racing did no resume until lap seven.

Hoggard timed the restart perfectly, while Pasma came under pressure from those behind, including fifth placed Jewiss.

It took one lap to move past Priaulx for fourth, and another to take third from Hauger. Although no contact was made, Jewiss’s move down the inside at the final chicane led to Hauger running over the kerbs and gravel, where he lost control and span back onto the pit straight.

Pasma proved difficult to pass, and on several occasions the Finn forced Jewiss onto the grass in defence. Jewiss did well to keep control of his car on those occasions, and had his own mirrors full of Priaulx and Doohan. The race ended with Pasma in second, only two tenths ahead, and with some serious questions about the Arden driver’s choice of manoeuvre.

Hoggard took his second win in three races at Donington with a massive 11.575s winning gap.

Doohan just beat Priaulx to fourth, and they sat at the front of a large train of cars that had been able to keep pace thanks to Pasma’s defensive driving.

Most impressive of these was Simmons, who was involved in one of the lap one incidents, and was wrongly picked up by the safety car as the leader. He was only released a lap before it entered the pits, and he closed a gap that stood north of 20 seconds to the rest of the field between that point and the final few laps.

Once there he benefitted from the closeness of the cars to pick his way to sixth, gaining some important points.

Jamie Sharp finished seventh after his lap one near miss, with Skelton, Tonteri and Hauger rounding out the points.