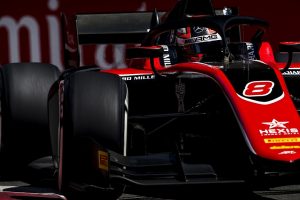 George Russell made up the disappointment of missing out on the feature race victory by winning the Formula 2 sprint race in Baku from 12th on the grid.

A flurry of stallers vaulted Russell into the top 10 at the start, and he was fighting over the final podium position by the third lap.

He gained the spot when championship leader Lando Norris ran wide at Turn 1, who had been attempting to find a way past Nicholas Latifi for second.

Latifi held off Russell for one lap, but his defensive driving had meant that race leader Sergio Sette Camara had a 4.5 second lead.

Despite having a large lead, Sette Camara continued to push, but started making mistakes and Russell only took a few laps to close in.

With four laps to go Russell took the lead into Turn 1, where he lost the feature race due to a poorly attempted pass by Nyck de Vries, but Sette Camara fought back to reclaim the position.

A lap later he made it stick, this time down the main straight, and immediately started to pull away.

He crossed the finish line with over two-and-a-half seconds over Sette Camara, who is now only behind Carlin team-mate Norris in the championship points. Russell’s first victory has brought him up to fifth in the standings.

Latifi’s rearguard action continued, and he was only disposed of fourth on the penultimate lap by de Vries, who took Prema’s first podium of the season.

Norris finished just behind Latifi in fifth, having spent the whole race unable to find a way past the DAMS driver.

Feature race winner Alexander Albon and runner-up Jack Aitken both stalled at the start, and finished 14th and 12th, although Aitken did set the fastest lap.

Artem Markelov was another of the stallers, and the Russian Time driver failed to make it past the first lap.