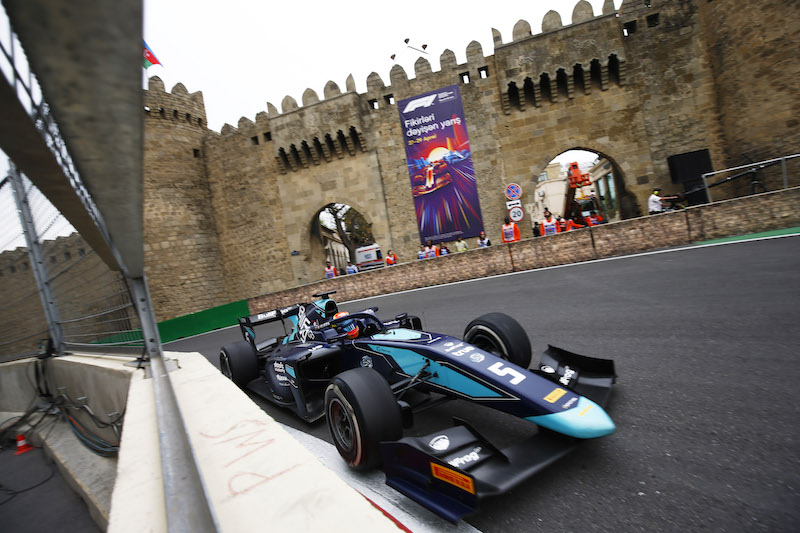 Alex Albon took a remarkable first Formula 2 win from pole in the Baku feature race through typically chaotic circumstances on the Azerbaijani circuit.

Albon led the first stint of the race on the super soft compound tyres, but dropped to sixth due to a slow stop.

Reigning GP3 champion George Russell inherited the lead, with Nyck de Vries just on his tail. Roy Nissany and Artem Markelov had also jumped Albon due to a longer first stint, although Albon quickly made it back past Markelov.

Defensive driving from Nissany and some quick laps from Russell and de Vries on the medium compound meant the top two broke away, and when Albon did move back onto the podium he was already 10 seconds behind the leader.

Russell was untouchable up front, and had a five second lead over de Vries by the halfway point of the race.

On lap 18 of 29 Nissany crashed at the exit of Turn 3, leading to the second safety car of the race. The first had been brought out on the first lap when his Campos Racing team-mate Luca Ghiotto span on cold tyres at the start of the 2.2km main straight.

Russell’s lead was reduced to nothing, and the order behind him sat as de Vries, Albon, Antonio Fuoco, Markelov, Sergio Sette Camara, Nicholas Latifi, Lando Norris and Jack Aitken. Latifi had started from last and both Norris and Aitken had been at the back on the first lap due to stalling.

Several of those drivers misjudged how cold their tyres were going into Turn 1, and the ensuing chaos reshuffled the order.

A late braking move for the lead went wrong for de Vries, as he missed the corner, cut up Russell and held up Albon. Russell came the worst off, as he then found himself unable to fully turn round in the escape road.

Fuoco took the lead as a result, with Albon second and Sette Camara third, while?Markelov also locked up heavily and fell to the back of the field.

Two laps later Sette Camara was moved down to fourth by Aitken, while Albon edged closer to Fuoco.

Albon got the job done into Turn 1, with little defending from Fuoco, and immediately started to pull away.

Being in the lead became more difficult though, as an exploding engine for Markelov left a thick cloud of smoke throughout the second sector and run to Turn 15, where Markelov parked his stricken Russian Time car.

The lead gap closed as Albon treaded extra cautiously through the yellow flags and the smoke, but wasn’t challenged by Fuoco, who put up a poor defence when Aitken came past for second on the penultimate lap.

Albon crossed the line after an hour of racing to take his first victory, with Aitken taking his first podium in an incredible second place and Fuoco the first for the Charouz team in third.

MP Motorsport duo Ralph Boschung and Roberto Merhi had tidy races to finish seventh and eighth, with Merhi getting sprint race pole as a result, while Tadasuke Makino and Sean Gelael rounded out the points.

Russell finished a minute behind the winner in a frustrated 12th, as de Vries had to retire for reported bent steering.