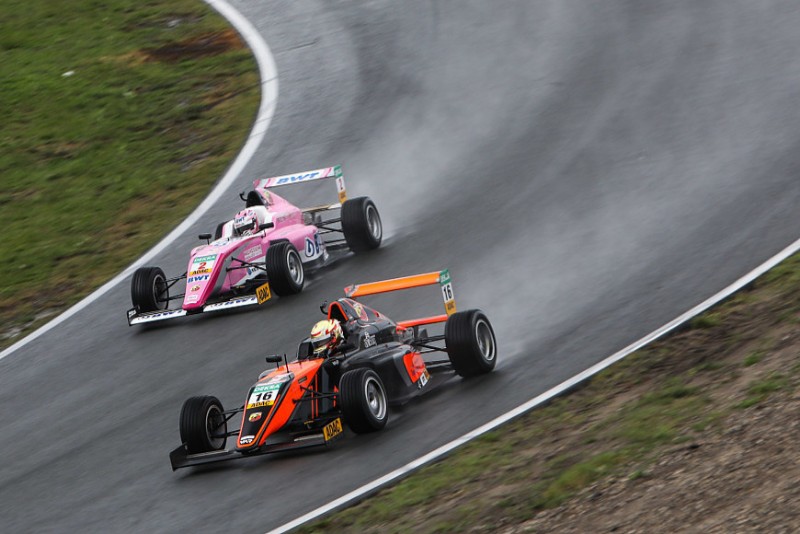 R-ace GP’s Gregoire Saucy was Estner’s challenger for the majority of the race, only losing second place on the last lap to US Racing’s Alessandro Ghiretti after a safety car restart. Ghiretti hounded Van Amersfoort Racing driver Estner to the chequered flag, but could not make a move.

Estner’s team-mate Niklas Krutten also made a pass immediately after the safety car restart on R-ace GP’s Mikhael Belov for fourth, with the third VAR car of Dennis Hauger attempting to follow suit but failing to make it stick.

Sauber Formula 1 junior Theo Pourchaire extended his points lead in seventh, as several of his US Racing team-mates had races to forget. Arthur Leclerc rose from the back of the grid into the top 10 early on, but he lost several places with a spin and then ended his race when he overcorrected and was collected by R-ace GP’s Laszlo Toth.

The fourth US Racing car of Roman Stanek had to take avoiding action during the incident, which dropped him out of the points too. He recovered to 11th place, less than two tenths off a second off rookie rival and championship debutant Hadrien David.

Finishing ahead of David were Prema’s Alessandro Famularo and Oliver Rasmussen, picking up points for Prema after their team-mates Paul Aron and Gianluca Petecof crashed into each other on the opening lap and retired.

The last retirement of the race was VAR’s Ido Cohen, who was punted off by team-mate Lucas Alleco Roy on the last lap. Roy was handed a 30-second penalty, dropping him from eighth to 13th.