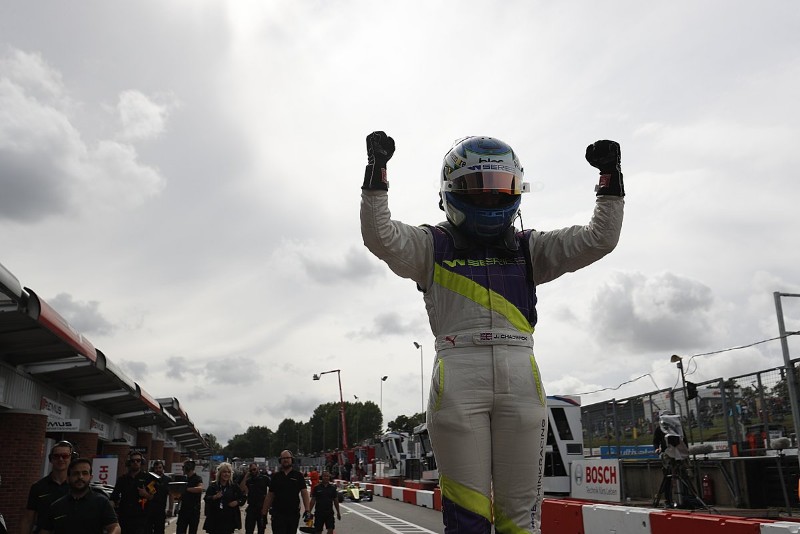 Alice Powell won the final W Series race of the season at Brands Hatch, as Jamie Chadwick was crowned champion with a fourth place finish.

Chadwick got away cleanly at the start from pole, while Esmee Hawkey stalled from third and led to some quick evasive action from those behind.

On lap six of 21, Powell dived down the inside of Chadwick at Paddock Hill Bend but failed to make the move stick and the pair went side-by-side up to Druids, with Powell eventually coming out on top.

The race immediately got worse for Chadwick as Kimilainen, who had been stalking behind, got past the Briton just before Graham Hill Bend and immediately pulled away.

Chadwick lost several seconds and fell into the clutches of title rival Beitkse Visser, and on lap 15 the safety car was called out after Miki Koyama spun at the Sheene Curve, bunching the field back together.

It was a tough race for Koyamam who had earlier received a drive-through penalty for starting outside her grid box.

The safety car came in with just short of six minutes remaining and Powell and Kimilainen pulled clear once again, lapping considerably faster than the rest of the field.

Visser was able to close back in on Chadwick and then passed her going into the Sheene Curve, putting two wheels on the grass in the process.

Powell crossed the finish line half a second ahead of Kimilainen to win her first W Series race while Visser ended up third, 5.7s down the road.

Jamie Chadwick managed to hold on to fourth, ensuring her the W Series title by 10 points.

Fabienne Wohlwend was unable to get close enough to Chadwick to make a move in the closing stages and she ended up fifth, ahead of Vicky Piria and Jessica Hawkins. Marta Garcia, Sabre Cook and Sarah Moore rounded out the top 10.