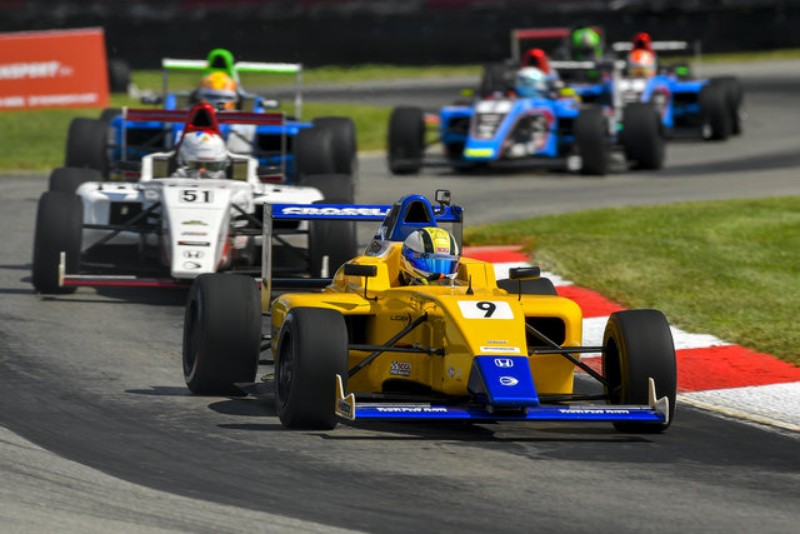 Prior to practice getting underway on Thursday afternoon, two test sessions were held. The extra track time was particularly valuable for Liam Snyder, who was making his debut with Crosslink/Kiwi Motorsport.

In qualifying it was DEForce Racing?s Guilherme Peixoto who took his first pole position, just 0.089 seconds ahead of Car. Nicky Hays had been in contention for the front row, but a red flag put a halt to proceedings. After the track was cleared the session was extended by two minutes, and Hays dropped to seventh.

Peixoto and Porto made a good start and soon built up a lead of more than two seconds over Wyatt Brichacek and Hays. By lap eight Peixoto?s tyres were fading and Porto took over at the front.

Meanwhile Car was on a charge from seventh on the grid and closed up on Peixoto and Hays, whilst bringing along team-mate Arthur Leist.

At times Porto, Hays and Car were three wide, but Porto held his line. Car moved into second after Hays? car got loose on a dirty part of the track. Porto held on to beat Car by 0.243s, with Hays taking his first podium in third.

On Friday afternoon, Car took a controlling race two win. A Full Course Yellow was deployed early on, and Car made a good restart as Hays, Peixoto and Brooks carved through the field in just two laps to close the gap.

Relief came for Car with two minutes remaining with another FCY, and the race ended behind a safety car. Hays and Peixoto completed the top three. In only his second race, Snyder finished in sixth place.

Race three was yet another lights-to-flag win for Car, but his rivals didn?t make it easy. The Australian made a good start until a FCY, caused by Jose Blanco-Chock getting stuck in the grass, brought his charge to a halt. Car pulled away at the restart as Hays was challenged for second by Brooks, Peixoto and Porto.

A second FCY was deployed and the race resumed with two minutes to go. Peixoto went around the outside of Brooks for second but was unable to hold the position, leaving Car to take the win by just over one second. Dylan Tavella beat Porto by 0.5 seconds for fourth place. On the last lap Hays was forced wide and spun at Turn 2, but recovered to finish in 15th.