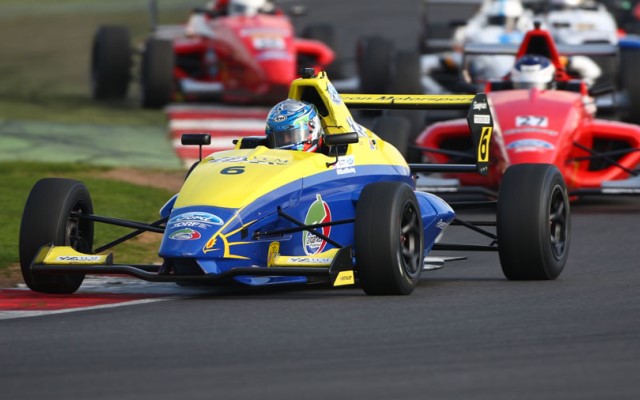 Harrison Scott became the third different first-time winner from the three Formula Ford GB races at Silverstonein the final race of the weekend.

Just as in the weekend’s two previous races, Sam Brabham got the jump on his JTR team-mate Max Marshall at the start to take the lead but once again he would come under pressure and ultimately be denied the win.

Camren Kaminsky made it a JTR one-two-three behind Marshall and Brabham for the first couple of laps but Marshall then slowed with a repeat of the turbo pipe problems he had in race two.

After starting fifth, Scott was pressuring Kaminsky for second and got by on lap 6. It took until lap 17 for Scott to get past Brabham, taking advantage when the latter ran deep at Luffield.

Brabham held on from race two winner Jayde Kruger to claim second, with Juan Rosso finishing fourth ahead of Kaminksy.