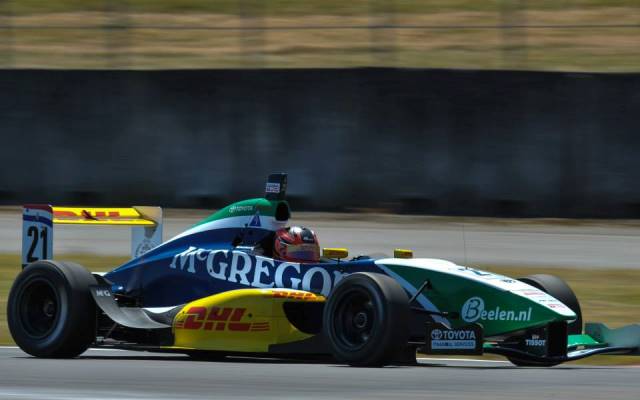 Title contender Jann Mardenborough started from the reverse grid pole position but lost a couple of places off the start, as Levin Amweg went into the lead ahead of Ryan Tveter.

Egor Orudzhev crashed out on the second lap, triggering the first stoppage. Amweg then went off at the restart, with Tveter inheriting first ahead of Schothorst and Mardenborough.

Brendon Leitch brought the safety car back out shortly afterwards with an off. Schothorst took the lead after the restart away from Tveter, who then crashed and brought the red flags back out with three laps remaining.

The race result was declared at the end of the 12th lap, handing Schothorst his second win of the campaign. Tveter was excluded from the results for triggering the early finish, allowing Mardenborough to take second place and reducing his points deficit ahead of the deciding race to just nine.

Damon Leitch took third place, leaving him just seven points behind Mardenborough. Macauley Jones came through to record his best result of the series in fourth ahead of Gustavo Lima, with Robin Hansson ending up sixth.

James Munro was seventh ahead of championship leader Andrew Tang, who started sixth but fell back to ninth after the second safety car. Jordan Oon and Michael Scott completed the top ten.

Nick Cassidy finished 19th after starting last following his race one non-start, but starts on pole for race three as he attempts to claim a third New Zealand Grand Prix title. Tang is due to start second, with Mardenborough third and Leitch eighth. Orudzhev and Martin Rump are now officially out of title contention, 129 points behind.