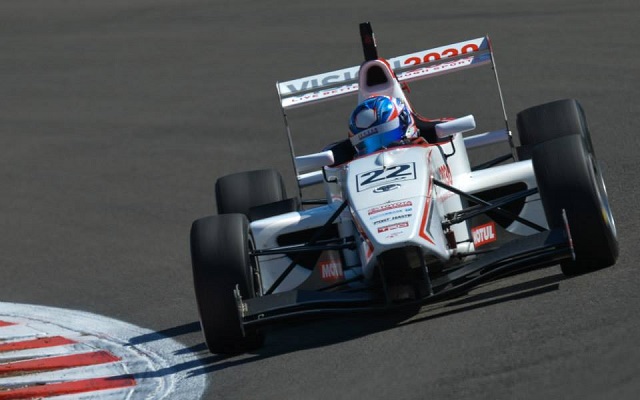 Toyota Racing Series returnee Nick Cassidy took his third New Zealand Grand Prix win in a row in the final race of the season, while his teammate Andrew Tang became the series champion after finishing in third.

Cassidy, who started the race from pole alongside Tang, led every lap of the race despite multiple safety car interruptions.

The Neale duo kept position over the opening laps, as did Tang’s main title rival Jann Mardenborough in P3, but none of them got to settle into a rhythm as the safety car was called to the track early on due to frontrunner Ryan Tveter‘s retirement.

The first restart would see Mardenborough drop two places, behind James Munro and another title hopeful Damon Leitch. Munro managed to keep up with the leaders, completing a temporary Neale 1-2-3. while Mardenborough soon powered through to fourth and began catching up.

The Neale cars’ relaxing Sunday drive came to an end with another safety car period, which was initiated by Alif Hamdan. This time, Mardenborough aced the restart, first overtaking Munro before the start-finish line and then getting ahead of Tang on the following lap.

As the first half of the 35-lap special came to an end, so did Damon Leitch’s title hopes – as Victory Motor Racing’s team leader wound up beaching his car in the gravel, bringing out yet another safety car.

The safety car came in with 16 laps to go, leaving the rest of the race to run under green. Again, Cassidy held on to first at the restart and, even though Mardenborough remained within a second of the lead for the rest of the race, he never quite found himself close enough to attempt an overtake.

Singaporean Tang ran comfortably in third and even began closing in on Mardenborough over the final laps, but had little reason to try a move with third guaranteeing him the title as they ran.

With the podium completed by Cassidy, Mardenborough and Tang, it was race two winner Steijn Schothorst who took fourth, keeping Munro at bay until the checkered flag.

Macauley Jones and Matteo Ferrer came together while fighting for sixth during the closing stages of the race, allowing Levin Amweg and Denis Korneev to pick up the positions. Martin Kodric, Gustavo Lima and Matt Rao rounded out the top ten.