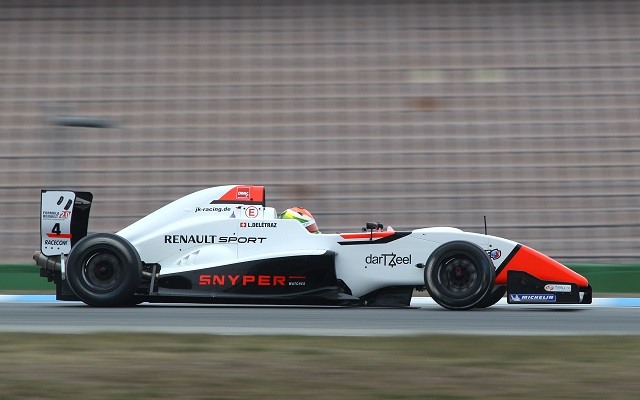 Swiss racer Louis Deletraz will remain in the Formula Renault 2.0 NEC championship for a second year, having been retained by Josef Kaufmann Racing.

The 16-year-old finished his first season in the series in 19th, picking up 77 points in total and a best finish of fifth in the second Silverstone race.

Prior to that, Deletraz successfully competed in the 2012 Formula BMW Talent Cup, finishing fourth in the three-race Grand Final at Oschersleben with a victory and another podium finish.

“I’m very happy to continue my collaboration with Josef Kaufmann Racing,” stated Snyper-backed Deletraz. “I really like how the team works and, with the experience we’ve gained together through 2013, we have big expectations for 2014. I’m totally confident that the team will provide me with a winning car. My objective is to be a front runner right from the very first race.”

Deletraz is the second confirmed driver in JKR’s Formula Renault NEC lineup, joining American racer Ryan Tveter, who will contest a dual campaign in the NEC series and the Eurocup.

“We are very happy to have extended our cooperation with Louis for this year’s Formula Renault 2.0 NEC championship”, said team boss Josef Kaufmann. “Louis showed very good progress during last year’s season and had gotten very strong during winter testing. We will start now with pre-season collective testing and then Louis is prepared to fight for the top positions in the 2014 FR2.0 NEC season”.

The German squad picked up four race wins during the 2013 Formula Renault NEC season, courtesy of Steijn Schothorst and Oscar Tunjo, while their rookie Dennis Olsen took an overall third in the standings.