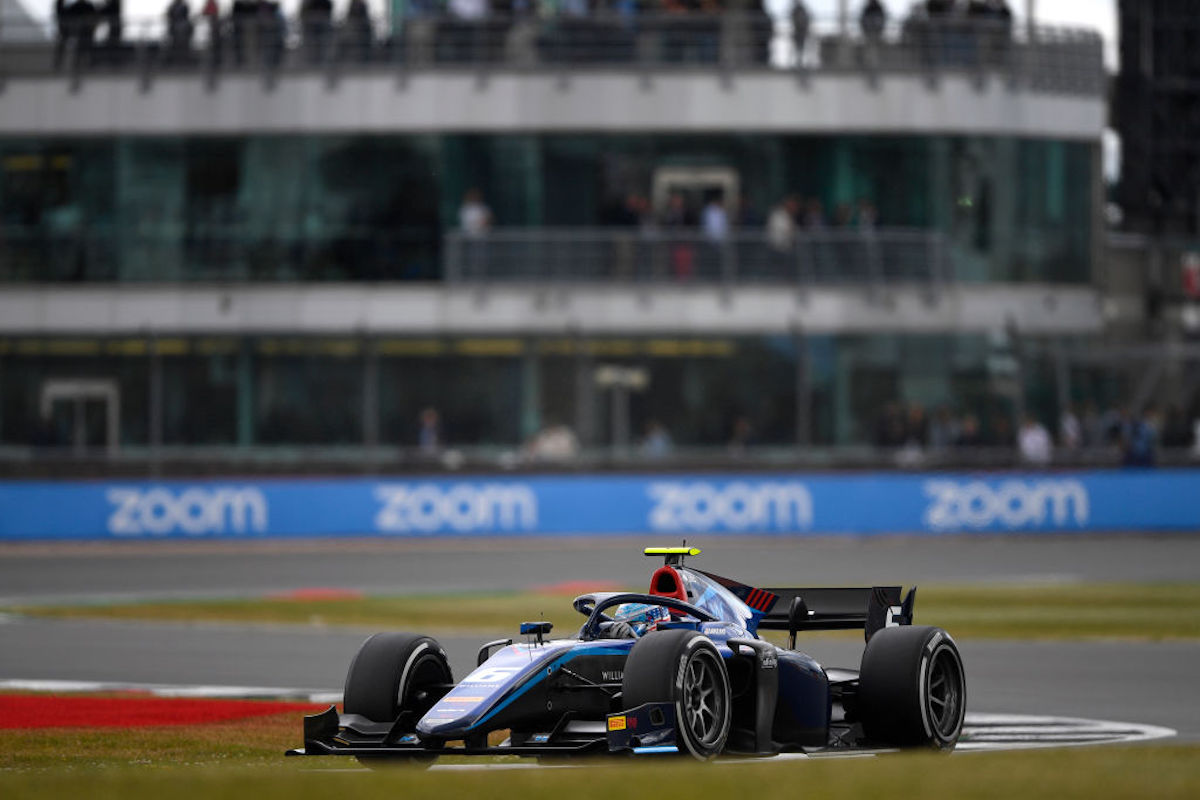 Logan Sargeant converted pole position to his maiden Formula 2 victory in the feature race at Silverstone.

Racing was paused early on after a dramatic crash for Roy Nissany and Dennis Hauger, in which the latter was sent over the sausage kerbs and launched into the air.

Carlin driver Sargeant controlled the restart, and remained in the lead or net-lead throughout the race. He finished 1.6 seconds ahead of Theo Pourchaire in second.

Nissany and Hauger were battling just outside the top 10 on lap one when the DAMS driver forced the Prema driver off track on the approach to Vale. Hauger was sent over the sausage kerbs at the next corner and hit Nissany’s car from above as Nissany made the turn. They were both sent into the gravel, with Hauger landing on Nissany’s halo. Both walked away from the cars and the incident will be investigated post race.

Meanwhile, Pourchaire had got a strong start to climb up to second and was close behind Sargeant after the safety car period which followed the incident.

The pair came into the pits together and were separated by a little over a second. But as the pit stop period was worked through and the duo came through to the front of the order, Pourchaire had closed in on the back of Sargeant. They were separated by just 0.7s in the closing stages of the race and Pourchaire appeared to be getting closer.

Pourchaire couldn’t get close enough to make a move, however, and Williams junior Sargeant was able to pull away again in the closing stages of the race to take a comfortable victory.

Liam Lawson finished third, having spent the closing stages of the race holding off Frederik Vesti and Felipe Drugovich. Drugovich found a way past Vesti on the final lap to take fourth.

The results remain provisional, with both ART drivers under investigation after a pit stop infringement which is yet to be resolved.

There were a number of slow stops throughout the field. Ayumu Iwasa was the first to be caught out when his left rear tyre was delayed. He dropped down the order and would only finish 12th. Juri Vips was another caught out with pit stop problems.

Vips and Jehan Daruvala were two of the last to pit, holding out at the front of the field. Vips pitted at the end of lap 22 from the lead of the race and had a slow right-rear change. When Daruvala pitted the following lap, he came out ahead of Vips, but the Hitech driver quickly made back the position.

He climbed up to sixth by the chequered flag ahead of Daruvala and Marcus Armstrong. Jack Doohan and Jake Hughes, who were the last of the pitters, finished ninth and 10th.