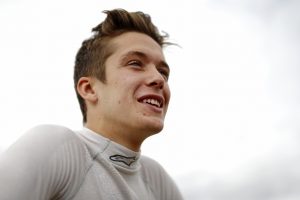 Sacha Fenestraz believes that improved tyre management allowed him to put a disappointing run of results in the Formula 3 European Championship behind him at Silverstone.

The reigning Formula Renault Eurocup champion led the standings after winning at the opening round in Pau, but did not visit the podium again until the first race at Silverstone last weekend, for which he claimed pole position.

The Renault F1 junior put the barren period down to struggles with tyre management, which he made progress on at Silverstone.

“It was the tyres, yeah,” Fenestraz revealed to Formula Scout.

“Since the beginning of the season everyone has been a bit like that. For us it was the last two race weekends before Silverstone, and for now it looks a bit better because we know how to manage the tyres.

“It?s nothing about the car, it?s just managing the tyre better.”

In the first two races at Silverstone, Carlin driver Fenestraz was engaged in battle with championship leader Dan Ticktum.

He missed out on his second win of the year in the first encounter, while a battle for seventh place in the second race went Fenestraz’s way after Ticktum was penalised.

“The first race was good, it was a bit of a shame to give up the win like that.

“We were struggling in general with the tyres, as we saw everyone. I think the issue was biggest for Prema, but we also had a big problem with the tyres. I think Dan managed the tyre early in the race better than me, then I had to push at the minimum [to keep him behind], but then at the end I didn?t have anymore grip. He was just faster.

“There was a bit of a mistake from me, I could?ve made the move a little bit harder for him to pass me. Closing the door or something else. We learn from our mistakes, but I’m a little bit angry about the result. We wanted the victory. We?re right where we should be. One side I?m happy to be here, but I want this win so I will try to go for it.”

Fenestraz’s defence was more robust in the second race, and he maintained position over Ticktum thanks to the latter’s penalty.

In the final race of the weekend Fenestraz finished second once again, this time to Juri Vips, putting him on 103 points and 11th in the standings.

Boccolacci steps up to F2 in place of Merhi, Verschoor gets GP3 chance