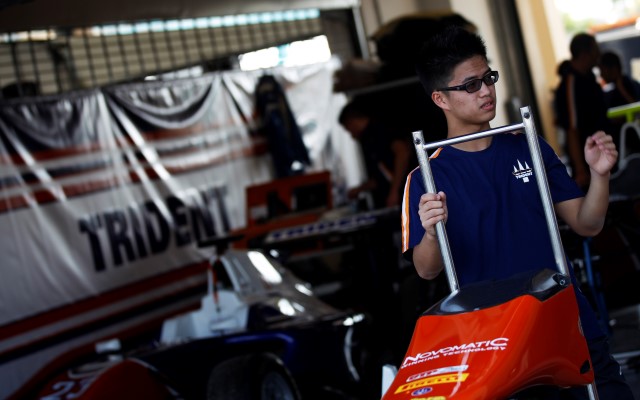 Trident have added Ryan Cullen and Kang Ling to their line-up for the final round of the GP3 season this weekend in Abu Dhabi.

The pair are the tenth and eleventh drivers that the Italian team has used in nine rounds in the series.

Patrick Kujala is retained after joining the team for Sochi following the collapse of the Marussia Manor Racing team.

His former team-mate there Cullen missed the trip to Russia but will now compete in Abu Dhabi alongside Kujala at Trident, off the back of winning in the MRF Challenge in Bahrain last weekend.

Chinese driver Ling began this year racing in Formula Renault 2.0 Alps for Koiranen before doing two rounds of German F3 and one of British F3 with the ADM Motorsport team.

Meanwhile, Hilmer Motorsport will be down to two cars for this weekend for regulars Riccardo Agostini and Nelson Mason after running Nikolay Martsenko in their third car in Sochi.

Giovesi to make GP2 return with Rapax in Abu Dhabi

Will Stevens gets F1 debut with Caterham in Abu Dhabi