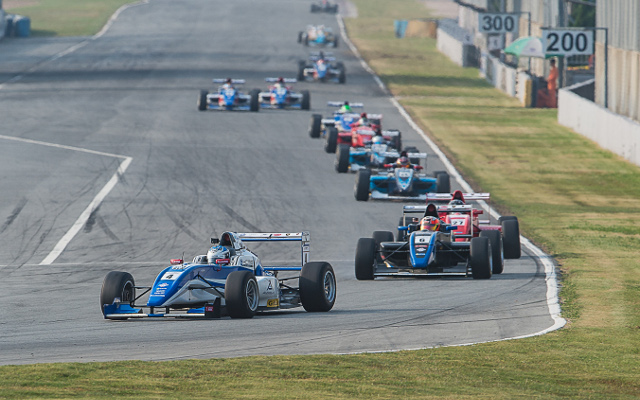 Estonian driver Martin Rump extended his lead in the Formula Masters China Series championship with his seventh victory in as many races, in the penultimate round of the season at Zhuhai.

It was far from easy going for the KCMG driver though, who had Alessio Picariello for company for much of the race.

The Belgian was on Rump’s tail in the early laps, but was forced onto the grass on lap four and despite spending the remainder of the race with a damaged front wing, managed to finish just two seconds behind Rump.

Rump’s closest championship rival Jake Parsons was a lone third for Meritus, ahead of fellow Australian Aidan Read in fourth, the latter returning to form after a poor weekend at Kuala Lumpur.

Read’s teammate Sean Hudspeth ran fifth early on, but had to contend with pressure from Meritus’s Daniel Woodroof. The Malaysian got past on lap four, and two laps later, Rump’s teammate Nick Rowe, who started the race in 12th, overtook the Singaporean for fifth.

Behind them, newcomer Oliver Askew was running ninth early on after passing Sean Zheng, but went wide in the closing stages of the race and allowed Zheng and Jeffrey Ye through, the two Chinese drivers finishing not far behind the struggling Hudspeth, who lost seventh to teammate Yuan Bo four laps from the end.

63 points now separate Rump and Parsons, and with only a maximum of 89 on offer, the Estonian could theoretically clinch the title on Sunday.