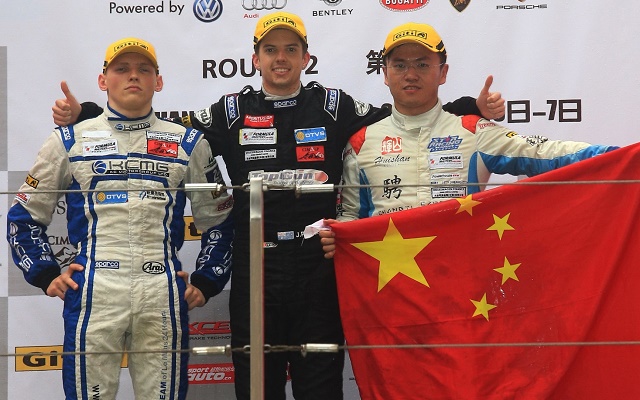 KCMG’s Martin Rump and Meritus GP’s Jake Parsons remain the only race winners of the 2015 Formula Masters China, winning a race each during Sunday running at Shanghai.

Both Rump and Parsons now have three wins to their name and are just one point apart in the standings.

The pendulum swung in the Estonian’s favour in the first race of the day, with mechanical issues ruling Parsons out of contention.

Without the presence of his Aussie rival, Rump led lights-to-flag, leading a KCMG 1-2 as teammate Nicholas Rowe earned his first podium in the series.

Daniel Woodroof was the top Meritus driver, holding off Aidan Read to finish on the podium for the third consecutive time.

Tomoki Takahashi was not far back in fifth, ahead of Yuan Bo, while Zheng Shang Guan led Sean Hudspeth, Jeffrey Ye and Kim Jeong Tae over the line in seventh.

The track conditions changed for race three and Parsons reigned supreme in the wet.

Despite Rump holding on to the lead off the line and the Aussie being involved in an incident with Woodroof, who had to pit for a front wing change, Parsons was into the lead by the end of the opening lap.

The top two was decided then and there, but the last podium spot was up in the air, with top local racer Bo eventually edging Matthew Swanepoel.

Read was fifth, having now finished all six races of 2015 within the top five, while Tae denied Rowe in the fight for seventh. Takahashi, Hudspeth and Zheng completed the top ten.