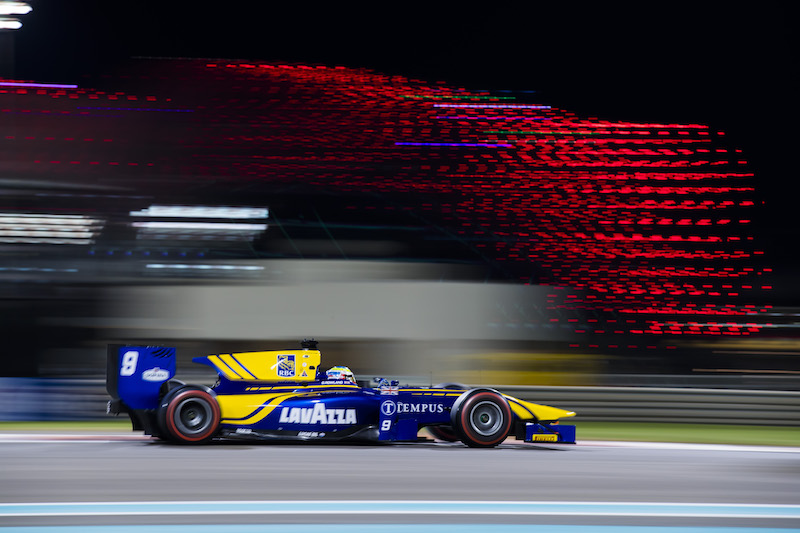 The result puts Rowland 15 points clear of Markelov in the fight for the runner-up position behind champion Leclerc, and put DAMS top of the teams’ title race, just two points ahead of Prema and three in front of Russian Time.

From pole position, Markelov led the first five laps of the race on the supersoft tyres in front of Nyck de Vries on the softs, who took the lead just before the pit window opened on lap six and the option starters dived for the prime.

Rowland, who gained third place from a slow-starting Antonio Fuoco off the line, passed Markelov down the back straight a lap after the stops to become the leading driver of the early stoppers.

Even with the fastest lap on lap nine he had a deficit of 33 seconds to the leader, but within laps had reduced that 26s.

That was helped by a lap 11 mistake from de Vries under pressure from Leclerc (who started sixth on the grid but passed Rowland for third on track before anyone pitted) with the Racing Engineering driver locking up at Turn 8 and going straight on into the run-off area.

After cutting the chicane de Vries rejoined ahead but the Dutchman, who is tipped to replace Leclerc as Prema’s lead driver in 2018, then slowed to give up the position.

Over the next 10 laps, Leclerc opened up an 11-second margin over de Vries, but his advantage over Rowland came down to 20.2 seconds even as the Briton passed four slower cars on track, pursued closely by Markelov.

When Leclerc pitted to fit the supersoft tyres at the end of lap 23, with eight laps still to run, he rejoined 16s behind Rowland, and although he quickly reduced that gap to 10s, he then began to slow again.

Rowland meanwhile increased his margin over Markelov from 2.1 to 6.6s to secure his third – and most impressive – feature race win of the season.

Behind the top three, their team-mates were all battling for crucial points in the closing stages.

Prema’s Fuoco twice passed de Vries to get fourth place, and was handed third by just 0.015s when team-mate Leclerc slowed dramatically at the chequered flag.

Ghiotto put moves on Nobuharu Matsushita and Nyck de Vries in the closing laps to finish fifth for Russian Time, while Rowland’s team-mate Nicholas Latifi also put a pass on Matsushita on the last lap to get seventh.

That means DAMS now has 376 points with Prema on 374 and Russian Time on 373, with Latifi set to start second on the reversed-grid for race two.

From the back of the grid after being excluded from qualifying for a lack of fuel following his on-track stoppage, Alex Albon threatened to rob Latifi of that front row place with his pace on the supersofts late on, but he eventually finished ninth in front of Jordan King.

After qualifying 14th for his F2 debut, Lando Norris slipped to the back of the pack in the opening laps before retiring on lap six with a smoking engine.