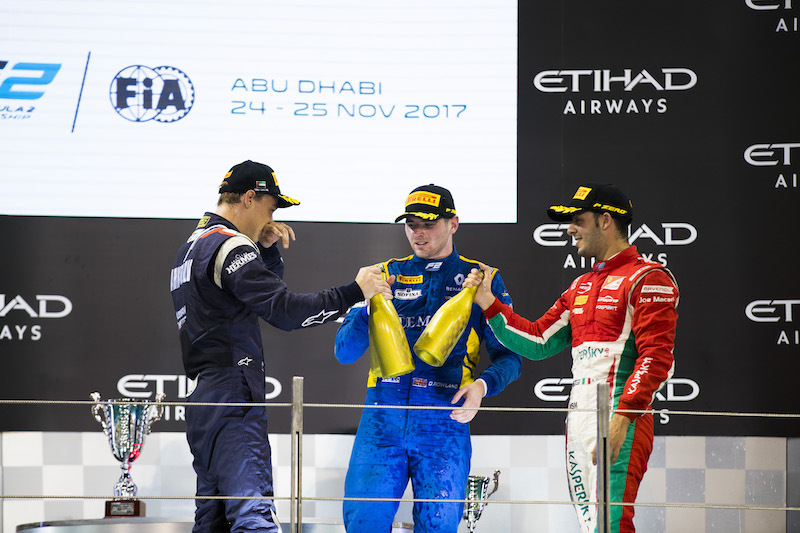 Artem Markelov has been handed victory in the final Formula 2 feature race of the season as well as the runner-up position in the championship after Oliver Rowland was excluded.

Rowland all but sealed second in the standings with his win on the road, but after the race it was found that the thickness of the skid block on his DAMS-run car was lower than required.

The result puts Russian Time driver Markelov 17 points in front of Rowland in the standings, and as he now has five wins and Rowland has two, he is guaranteed the position regardless of what happens in the sprint race.

There has also been a major shake-up in the close race for the teams’ title, with the added twist of Prema’s Antonio Fuoco being excluded from his original third place?because his front tyres were below the specified minimum tyre pressure.

That means Charles Leclerc is promoted to second in the final result – having handed Fuoco third on the finish line to boost the Italian’s championship position – while Markelov’s team-mate Luca Ghiotto moves up to third.

That puts Russian Time top of the teams’ standings, 10 points clear of Prema and 20 in front of DAMS.

Before the exclusions, DAMS had been ahead, two points in front of Prema and three in front of Russian Time.

Both Markelov and Russian Time are set to depart the series after this weekend, with the outfit absent from the list of teams entered for 2018.

Jordan King will now start the final race of the season – his last in the category – from reversed grid pole position alongside Alex Albon.