While GP3 took centre stage in Spain, we also look at action from German F3, F3 Open and BRDC F4…

Daly signals his championship intentions as Ellinas has a quiet one

The strength in depth of this year’s GP3 field was demonstrated in qualifying for the standalone event at Valencia’s permanent Ricardo Tormo circuit. Just half a second covered positions two to 17, but two tenths clear of the rest was Conor Daly. The American showed no hangover from his participation in the Indy 500 as he won from pole position, temporarily taking the championship lead away from Tio Ellinas, who had to make do with sixth after a slightly disappointing qualifying result.

But on a circuit that proved to be very difficult to overtake on, Daly was unable to progress from eighth on the reverse grid in race two. Ellinas slipped from third to fourth at the start, but that was still enough to regain a four point lead over Daly at the head of the standings.

Facu Regalia had an impressively strong weekend, lining up third on the grid and then taking the fight to Daly in the early stages of the first race. Although Valencia was something of a home race for Regalia, having grown up in Spain and raced for local team Campos last year, he had shown good promise in testing, setting the fastest time at the Hungaroring the previous week.

In race two he finished seventh, on the tail of Kevin Korjus. After his surprise fastest time in Barcelona qualifying, the Estonian looked capable of a repeat result when he topped practice in Valencia. He could only go sixth quickest though, and although a fast start promoted him to third in the first race, he lacked the pace in either. Team-mate Aaro Vainio qualified one spot higher than Korjus but fell back to seventh at the start of race one. In race two, he was unable to fight for the lead and slowed badly towards the end. But this is form more similar to that that had been expected of the new Koiranen team, rather than their one-two finish in Barcelona. 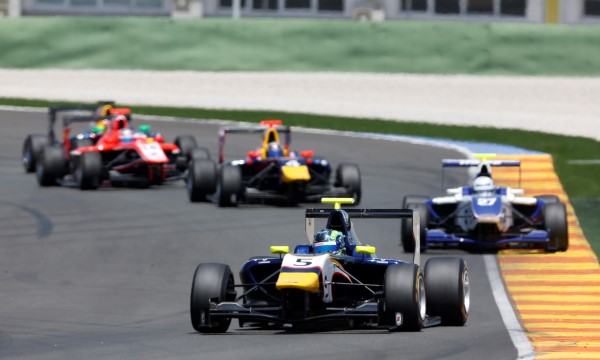 Robert Visoiu was the driver that Vainio and the rest couldn’t touch in race two, with a surprisingly dominant performance. Although a second-year driver, the Romanian wasn’t expected to be able to match MW Arden team-mates Carlos Sainz and Daniil Kvyat this season. He qualified behind both for the second time in Valencia, but crucially snatched eighth in race one away from Dino Zamparelli, setting him up for the race two win. Sainz and Kvyat meanwhile had no repeat of their Barcelona tyre degradation horror show. They started race one at opposite ends of the top ten (Kvyat second, Sainz eighth) and met in the middle on the first lap, in fourth and fifth. Another good start for Sainz in race two gave him his maiden podium in third, with Kvyat fifth.

Patric Niederhauser came into the weekend second in the standings after a double podium in Barcelona, but had a nightmare. He and Jenzer had an awful qualifying, Niederhauser setting the 16th fastest time (one spot ahead of team-mate Alex Fontana). He finished race one out of the points in 13th and then retired from race two after contact trying to pass Zamparelli.

Nick Yelloly was another to finish the weekend with no points, but he was one of the quickest drivers. Second in practice, he was then third in qualifying but excluded after his car failed the ride height test. Whilst most struggled to overtake on the Valencia track, he went from last to 12th in race one, and then in race two – after losing some places at the start – he finished just behind Daly in ninth. It wasn’t a good weekend for his points tally, but Yelloly showed he can repeat his speed from FR3.5 this year. 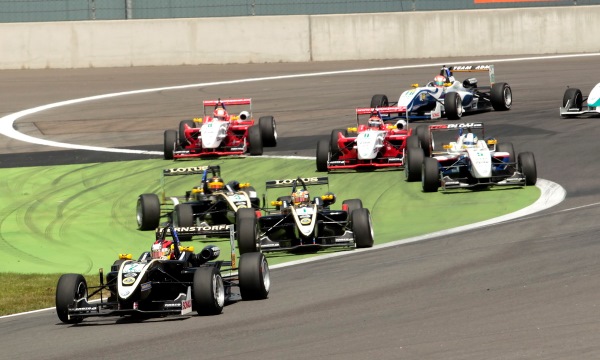 In qualifying at Lausitz, Marvin Kirchhofer topped qualifying for the fourth time from five rounds, but ruined his victory hopes in race one with a sluggish getaway from the grid. Lotus team-mates Emil Bernstorff and Artem Markelov moved past into first and second, and Gustavo Menezes also took Kirchhofer when he got loose exiting turn one. Kirchhofer fought back to take second before the flag, but couldn’t stop Bernstorff. In race two from the reverse grid, he stole third from Markelov just before the line. In race three, he was again beaten off the start, but this time only by Bernstorff. He managed to pass his British team-mate with four laps left to maintain his record of winning a race every weekend so far this season.

In addition to his first and a second, Bernstorff only finished sixth in race two after an off-track excursion while side-by-side with Kirchhofer dropped him down the order. Markelov meanwhile continued his consistent form, having now recorded 12 podiums from 14 races so far but still chasing his first win of the year. That consistency however does mean he still sits second in the standings, nine points ahead of four-time winner Bernstorff but 85 behind Kirchhofer.

Menezes scored his maiden win in Europe in race two thanks to a flying start. Combined with a fifth in race and a fourth in race three, he is now fourth in the standings as the best non-Lotus driver, two points ahead of John Bryant-Meisner who could do no better than a fifth over the weekend. Performance team-mate Thomas Jager finished second behind Menezes in race two.

Double win brings Mason back into contention, but only on appeal 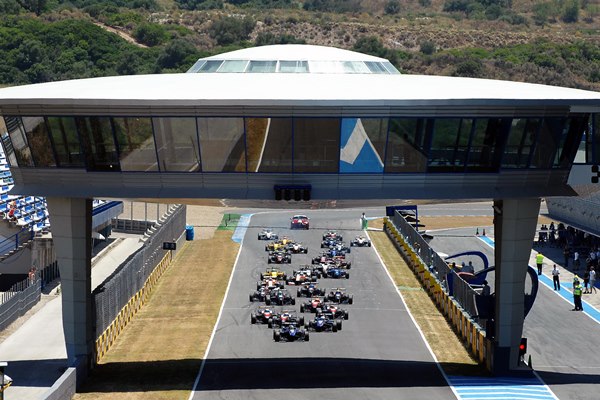 Hector Hurst led the F3 Open for much of the weekend (Photo: F3 Open/Fotospeedy)

Nelson Mason took two wins at round four of the F3 Open at Jerez to climb into second place in the standings. He led the first from pole position until chequered flag, while team-mate Ed Jones had pole position on Sunday, but Mason claimed the lead on lap five. Jones made it a West-Tec one-two in both races, but the pair were excluded from race one on a technical irregularity. The team appealed the decision, meaning the result stands for now.

Behind the West-Tec pair, RP Motorsport’s trio of Santiago Urrutia, Alexandre Cougnaud and Sandy Stuvik took the next three spots in race one, with Cougnaud ahead of Stuvik and Urrutia in race two. Stuvik’s continued consistency gives him a 17 point lead over Mason and Jones, currently tied for second pending the outcome of that appeal. Urrutia is fourth, a further 23 behind and two ahead of Hector Hurst, who had to make do with a sixth and an eighth for De Villota.

Jake Dalton looked set to continue his strong start to BRDC F4 when he took pole for round three at Snetterton, but a drive shaft failure at the start of the first race ruined his weekend. A further car problem saw him finish a lap down in race two, but he was able to salvage a third place from the final race.

That wasn’t enough to stop him finishing the weekend behind Charlie Robertson in the standings. The single-seater rookie finished second in race one and then fifth in race two. With the fastest lap across those two races, he started race three from pole and went on to take his second win of the season. However, he and HHC team-mate Raoul Hyman, who finished second, were excluded after their cars failed post-race checks. Stripped of 30 points, he now sits three ahead of Dalton at the top of the standings.

James Fletcher, who only made his debut at the previous round at Brands Hatch, took advantage of Dalton’s issues to win race one before adding a seventh and a second in the remaining races. In race two, Struan Moore scored his first win from the reverse grid pole, while in race three, once the HHC duo were excluded, it was the turn of Jake Hughes to finally deliver on his early-season pace and become the seventh different winner from nine races.

Report: Fletcher wins at Snetterton after Dalton fails to get away

Report: Hughes handed win after Robertson and Hyman are excluded

In a weekend of inconsistency, Mason was the only driver to record multiple victories. It’s under a significant cloud however, with his win only standing if West-Tec’s appeal against exclusion is successful.

Hughes handed win after Robertson and Hyman are excluded