Hughes handed win after Robertson and Hyman are excluded 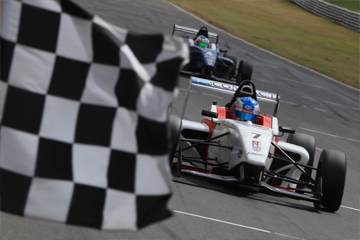 Jake Hughes took his first win in BRDC Formula 4 in race three at Snetterton after HHC Motorsport duo Charlie Robertson and Raoul Hyman were excluded from a one-two finish.

After starting from pole position, Robertson had recorded his second win of the season but he and team-mate Hyman were excluded from the results ‘for a technical infrigement concerning the attachment method of the rear gurney (part of the rear wing assembly).’

Jack Barlow and Pietro Fittipaldi started from the seventh row of the grid but were classified seventh and ninth in the results, with race two winner Struan Moore taking eighth. Diego Menchaca ended up with the final point in tenth.

Mason wins in Jerez once again