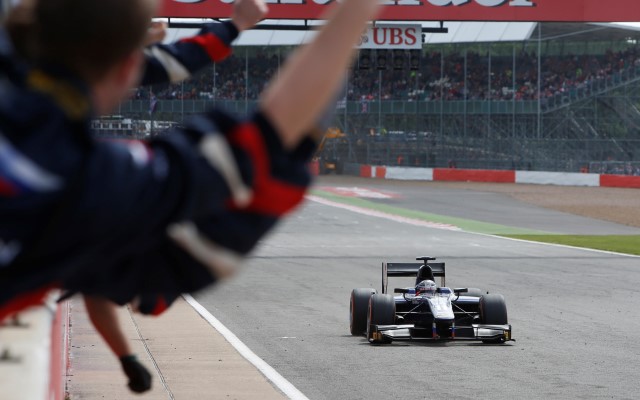 Other than the two home winners, the main talking point of the Silverstone weekend has to be the end of Stefano Coletti and Felipe Nasr‘s run of consistency. Championship leader Coletti had arrived having finished every race this year in the top six, Nasr every race in the top four. With the pressure mounting to turn that into a maiden win, Nasr went for the lead at the start of the feature race around the outside of pole-sitter Marcus Ericsson, but found himself forced off-track by the Swede, with contact made as he rejoined. The Brazilian dropped down the order with damage and eventually retired. In the sprint race he produced a standard Nasr fightback to get seventh.

Coletti produced a great defensive drive in the feature race to try and hold onto a podium on knackered tyres after an early stop. After slipping to fourth he was then hit by Fabio Leimer, resulting in his retirement. In the sprint race, Coletti couldn’t quite get as far as Nasr and had to make do with tenth – a non-scoring weekend for the Monegasque. Still, Nasr’s issues mean he has a 22 point lead over his chief rival.

The man to capitalise from all this was Sam Bird. He took advantage of the mess ahead of him at the start to go from fourth to first in one corner and took a relatively untroubled win, which was only in doubt when Coletti caught him while they passed slower traffic after their pitstops. He also went forward in the sprint race to fifth, leaving him now just nine points behind Nasr.

Leimer was fortunate to keep his fourth place in the feature race as stewards did find him guilty of putting Coletti out of the race, but just gave him a grid penalty for the sprint race. He fell back after going off at the start and could only finish 15th, but stays fourth in the points. 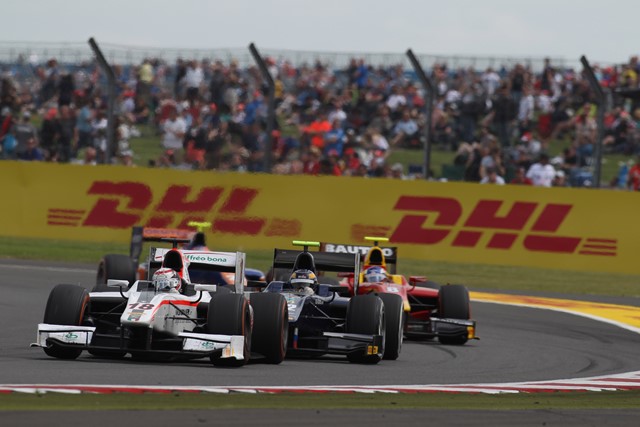 James Calado didn’t have the weekend he hoped would turn his season around. Restricted to tenth in a qualifying session decided early due to rain, his progress was hampered in the feature race when he made contact with Jon Lancaster, sending him backwards off the track. Finishing just shy of the reverse grid pole in ninth, he did all he could at the start of the sprint race to get up to third, but lacked the pace to trouble Rio Haryanto ahead and had to defend his first podium since Malaysia from Julian Leal. Remaining fifth in the standings, he might have closed the gap to the points leader this weekend but he’ll have to make more progress than that in coming races.

Lancaster survived the contact with his compatriot to take fifth in the feature race, then making a superb getaway to lead the sprint race from start to finish and win in just his sixth race since joining the Hilmer team. Other strong performances came from Tom Dillmann, who got a well-deserved podium with a late charge in the feature race, and Stephane Richelmi, who finished ahead of him in second after also making an alternative strategy work. Mitch Evans emerged from his late stop in a virtual second place, but was penalised for pit-lane speeding.

Next round: Nurburgring, 6/7 July

Harvey and Venturini joins winners circle as all struggle for consistency

Jack Harvey had had a quiet start to life in GP3 but came good at his home round at Silverstone, taking second place on the grid and then getting a better start than pole-sitter Kevin Korjus to take off into the lead and record his first victory. After a seventh in race two, he has now climbed to fifth in the standings, and only 25 points off the leader, putting him in title contention. 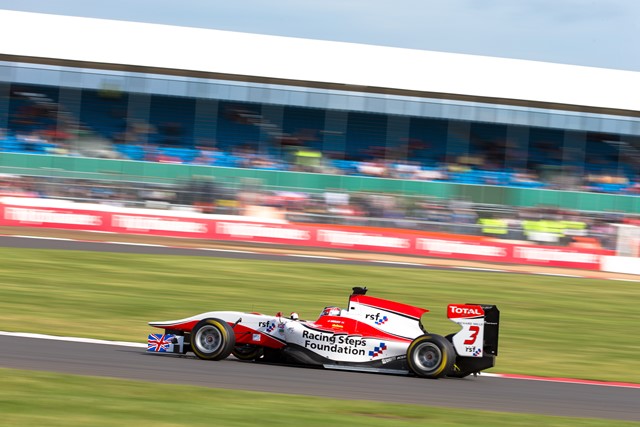 Korjus continued his strong start to the season, but a sluggish getaway prevented him from chalking up his first victory. After the first race he was one of only two drivers to have scored in every race, but lost that record when he slipped back to ninth in race two. Nonetheless, he now holds second in the points.

Tio Ellinas has failed to keep up the pace after his win in the season opener, failing to finish on the podium since. Silverstone only produced a fifth and sixth but, as the only driver to have now scored in every race and with everyone else failing to match even that level of consistency, he holds a ten point lead over Korjus.

After his victory in Valencia, Silverstone produced a double non-score for Conor Daly. A marginal jump start that took him from ninth on the grid to second saw him penalised in race one, while he was a casualty of a first lap collision in race two. He keeps third in the standings though, eight behind Korjus, whose Koiranen team-mate Aaro Vainio could only salvage eighth in race two after qualifying down the order, but is still fourth in the points.

Facu Regalia continues to be the surprise package of the season so far, following up his second place in Valencia with a third in race one at Silverstone. Fifth in race two leaves him just a point shy of Harvey in sixth, and one point ahead of Daniil Kvyat, who finished both races in fourth place.

Nick Yelloly came close to making it 100 per cent success for British drivers in GP2 and GP3 in race two, but he couldn’t quite find a way past pole-sitter Giovanni Venturini despite being quicker.

Other than Daly, Patric Niederhauser and Carlos Sainz were two other drivers to have non-score weekends. After qualifying tenth, Niederhauser went backwards at the start of the first race and finished 15th, then 11th in race two, following up his non-scores in Valencia to leave him ninth in the points, 41 off Ellinas. Sainz’s weekend started well on Friday with confirmation of his F1 debut at the upcoming test and then topping practice. He qualified fifth but then slipped back in the race before driving across on Lewis Williamson as they fought over eighth, Williamson having charged from 19th on the grid. Dropping to 13th, he eliminated a ten-place grid penalty to finish in the same place on Sunday. 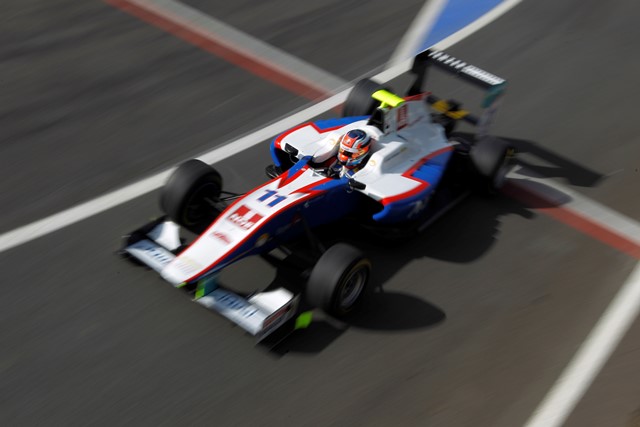 Next round: Nurburgring, 6/7 July

Bird gets our award this week for managing the highest points total over the two series, one that brings him right into GP2 title contention.