We preview the upcoming Masters of F3 event at Zandvoort, featuring 25 cars that will fight for the victory in the prestigious event…

The 2012 Masters of Formula Three event attracted a rather diverse grid with full-timers from multiple different championships forming a grid of 20. This year, it’s quite a bit more straightforward, with the introduction of the European F3 series, which this year has enough of a grid to ensure that the majority of the roster for the Masters event is made up from their regulars. Despite the loss of variety, though, the grid is as good as usual, with lots of very talented folk aiming to leave their mark on the prestigious yearly non-championship event.

We start with Prema, the Italian squad which has to be considered a favorite in any F3 event they participate in, including the Masters round, which they won in 2012 with Dani Juncadella. While things have been going very smoothly for Prema in the main series, with the team confidently leading the drivers’ and the teams’ standings, the absence of championship leader Raffaele Marciello could be an issue for the squad’s Masters hopes.

However, it isn’t all about the Ferrari junior, and Prema have a traditionally stellar squad to bring to the event even without him. Kicking things off is Alex Lynn, fourth in the European F3 standings with a win to his name. Lynn has been impressively rapid in his first year in the primary category but does seem to suffer from a lack of consistency. And, after Lynn looked very good on his first Masters appearance in 2012, when he finished seventh, he seems a prime candidate to take the event win this year.

His Austrian teammate, Lucas Auer, is another obvious contender. The Austrian might not have shown the outright pace that Lynn has had this year, but has been very mature with his driving, a factor that sees him in third in the European F3 standings. He’s never taken part in the Masters, but has shined at Zandvoort at prior stages of his career, taking double pole at the track on his first German F3 appearance last year.

Italian Eddie Cheever is only 16th in the European F3 standings after a tough rookie year so far. He’s looked good on-track on multiple occasions but seems to struggle for track knowledge – his prior career having been almost exclusive to Italian championships. He’s never done the Masters and, here, a top ten finish would be a very decent goal to strive for.

Finally, replacing Marciello is Emil Bernstorff, hailing from German F3’s Lotus squad for a one-off appearance with Prema. The Briton is a very reasonable choice in that regard – he is quick, has prior F3 Euro experience at Zandvoort (having done the 2012 season in the category) and is currently going strong in German F3, with four wins and third in the standings. If he gets back up to speed with the car quickly enough, he could aim for a podium.

While Prema won the event in 2012, Mucke have most recently won a year prior to that. The advantage the German squad has here lies in the fact that 2011’s winner – Felix Rosenqvist – still drives for them in the category and probably enters the event as the favorite. Rosenqvist is currently second in the main series, coming off the heels of an absolutely dominant Spielberg round in European F3. He’s had a great run of form recently and there’s very little reason to imagine why it should come to an end here. 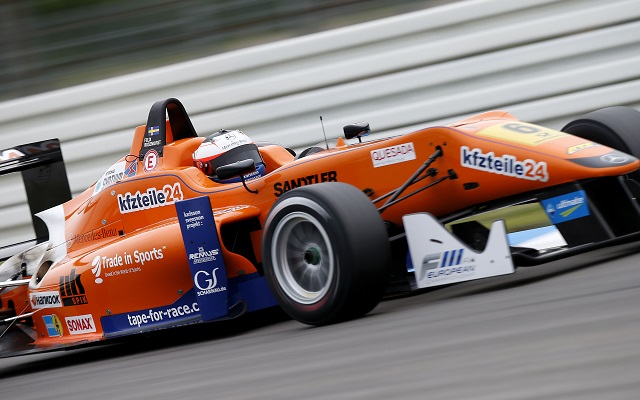 Michael Lewis also hails with prior Masters experience, having finished eighth in the event last year with Prema. He’s replaced DTM-bound Pascal Wehrlein at Mucke this year but has had trouble figuring out the car so far, which is reflected in him scoring only six points so far. Still, he knows the track quite well, having taken an F3 Euro podium here last year, and thus could be a factor for the top five.

Mucke will also field Israeli youngster Roy Nissany, for whom this is very likely to be a learning experience. He’s raced Zandvoort before in ADAC Formel Masters, with a best finish of fifth, and has been performing above expectations in European F3 this year, so a top ten finish is quite possible.

Finally, substituting Mucke regular Mitch Gilbert for one race is the very experienced Yuhi Sekiguchi. The 25-year-old driver won the Japanese F3 title in 2012 and has notably taken a Mucke car to fourth at the prestigious Macau F3 race in 2011.

Another team with a full-scale four-car assault on the Masters is Carlin, who bring their European F3 regulars to Zandvoort. Heading the list is Harry Tincknell, arguably the British squad’s leader and the team’s only race winner in 2013’s European F3 season so far. It might be quite a challenging race for Tincknell, though – due to his plentiful experience in British championships, he mostly excels at local tracks and has pretty much no prior experience at Zandvoort. Still, he is a consistent and very mature driver and has reliably been in contention for podiums this year. 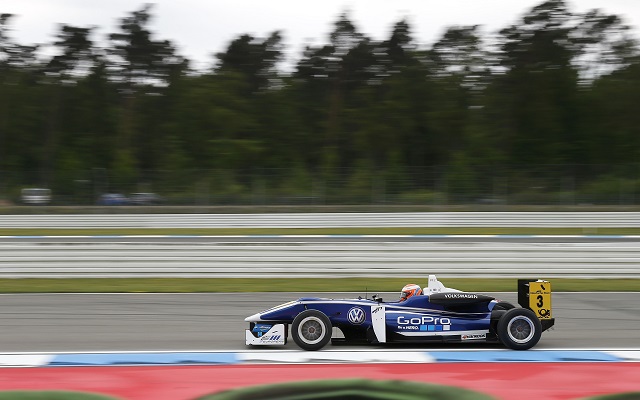 Carlin can also expect great things from Jordan King, who’s been having a very impressive rookie season in European F3.?He’s coming off the heels of a mighty performance at Spielberg, where the Briton has taken his first podium in the series, and overall sits in eighth in the standings. It should play into his hands that King has won at Zandvoort before, taking a victory here on his way to second in the Formula Renault 2.0 NEC standings.

The team’s other two rookies have also been quite notable this year. Single-seater debutant Jann Mardenborough has made quite a few headlines with his foray into the category, as he’s looked well within his depth in the very competitive category of European F3. Meanwhile, Nicholas Latifi has raised a few eyebrows with some really impressive races in his first year of European F3 and, if things go his way at Zandvoort, he could very well find himself in the top five.

The final four-car squad on the grid is are the Brits at Fortec, who also bring over their European F3 roster. Felix Serralles will lead the quartet, having been Fortec’s main hope in last year’s British F3 and this year’s European F3 series, having taken two podiums for the team in 2013. He has little in the way of previous experience at Zandvoort, having retired from last year’s Masters without completing a lap in the race, but he’s quite adaptable and should be a reasonable challenger for the podium.

Josh Hill has been one of the main surprises of the European F3 season, having scored his first podium and generally being a consistent man in the top ten. At Zandvoort, he could produce another shock result – just like King, he’s won here in Formula Renault 2.0 NEC.

Just like Serralles, Pipo Derani graduated with Fortec from British F3, yet his season in the main series has not gone so well so far, with 18 points and the best finish of fifth at the opener. Still, he has experience on his side, having been in the Masters for two years now – he retired on lap one in 2011 and was 11th in 2012. He should be aiming to get his personal best result.

Finally, the team’s new recruit Will Buller will also be making his third Masters appearance. He’s currently only 12th in the standings of European F3 and has recently switched over from T-Sport. His best result at the Masters in sixth last year and he’s also taken a win in the F3 Euro Series at the track, so he should be considered one of the definite contenders for podium.

Rest of the field 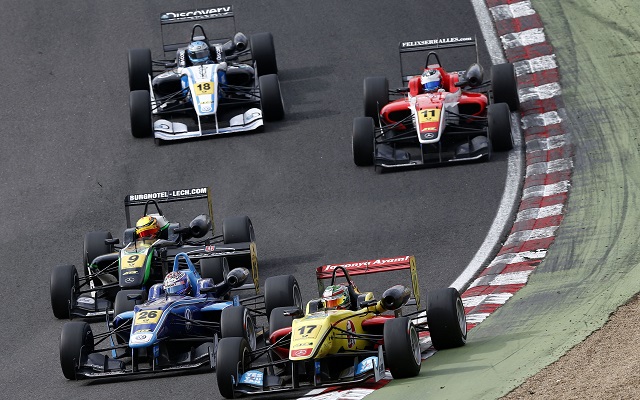 EuroInternational will be fielding one car with Red Bull Junior Team’s Tom Blomqvist at the wheel. For the Briton, 2013 has been rather difficult so far, with only three podiums in a season which he started as one of the favorites. He has no prior Masters experience, but has done Zandvoort in other series, including F3 Euro Series in 2012, where he managed a fourth and a fifth. If the car’s up to speed, he will be fighting it out at the top.

German squad ma-con will run the two drivers they field in the European F3 series. Sven Muller has had a difficult year so far, still searching for his first podium finish of 2012 and being involved in far too many incidents. In 2012, he made his Masters debut with Prema, finishing tenth – his real breakthrough came a bit later, with Muller taking double pole for the regular F3 Euro round at the track a month later. He’s very quick and, again, while much depends on the car, if it’s up to speed, he will be among those at the top. Meanwhile, his teammate Andre Rudersdorf is another one of the learners, coming to the track with little in the way of F3 experience. Rudersdorf has done some Zandvoort races in the German F3 Trophy Class, but this is very much a different level.

Van Amersfoort will run local driver Dennis van de Laar, with the other regular driver Mans Grenhagen unable to come up with funds for the non-championship round. Van de Laar could very well produce a decent result – he gets along with the track, having raced it in Formula Renault NEC and taken his only German F3 podium there a year later.

Double R bring in their usual European F3 lineup. Sean Gelael and Tatiana Calderon will both be continuing their learning years in European single-seaters, with neither having any Zandvoort experience to speak of. Rapid youngster Antonio Giovinazzi also has no Zandvoort record, but given his season form, could very well strive for a top ten finish.

Spike Goddard and Sandro Zeller will both be returning to the Masters, respectively with T-Sport and Jo Zeller Racing, after both drivers debuted at the event in 2012. They were among the three F308 runners in that field (with the rest racing F312s) – Zeller was the top placed F308 driver, with Goddard coming in in second among the older cars. They’re in the same machinery as the rest this year and will continue their learning experience in the big leagues.