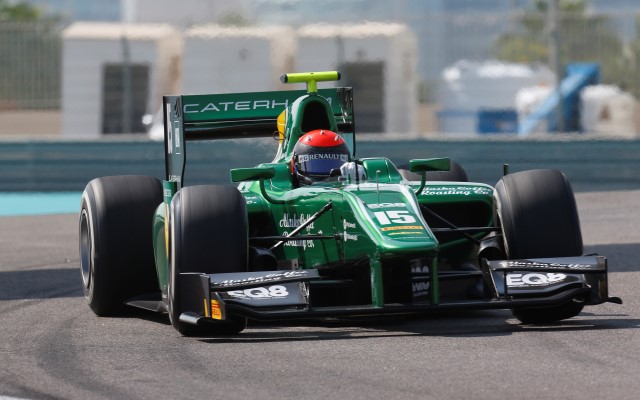 Alexander Rossi beat Jolyon Palmer to claim his first win in the GP2 Series, while Fabio Leimer did enough to secure the title with a fourth-placed finish after chief rival Sam Bird stalled at the start.

The decisive moment in the title fight came at a second attempt at the start, after an aborted getaway left three drivers stranded towards the back of the grid. At the proper start, Bird was left sitting on the front row as Palmer took the lead from pole-sitter Rossi.

The leading pair both went long into the race on their prime tyres but made different choices at their pitstops. Rossi had fresh prime tyres fitted at the rear of his car, with Palmer changing for four options a few laps later. Strong pace from Rossi after his stop meant that Palmer rejoined behind him.

Palmer quickly closed up on Rossi but his chances of getting past were not helped by a safety car which came out after Mitch Evans and Sergio Canamasas collided at the final corner. Rossi actually edged away after the restart to claim a 2.1 second victory.

Leimer was best-placed behind Rossi and Palmer for most of the race but after the safety car he was overtaken by Marcus Ericsson, who had recovered well having started 12th after being stripped of his pole position time after qualifying.

By now, Bird had worked his way back into the points in tenth, and with Leimer fourth, a ninth place finish for Bird would have been enough to carry the title fight into the final race on Sunday. Bird was right on ninth-placed Daniel Abt‘s tail at the final corner but could not get past, having to settle for tenth and concede the title to Leimer.

Dani Clos claimed the best result of his GP2 comeback in fifth place, only half a second behind Leimer. James Calado finished sixth having started 19th due to a grid penalty and complained of an engine down on power after one of his bargeboards became dislodged in front of his sidepod.

Title outsider Felipe Nasr finished seventh ahead of Johnny Cecotto, with Abt and Bird completing the top ten.