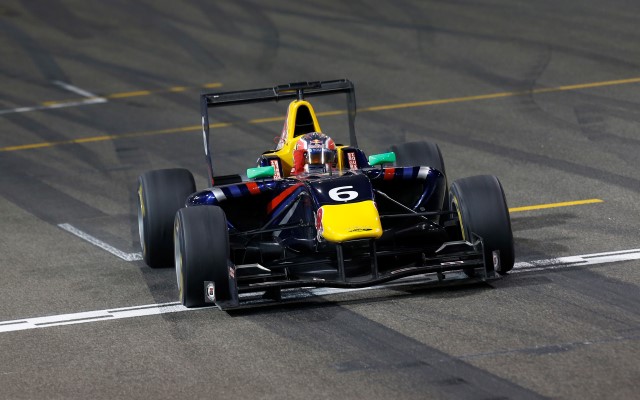 Daniil Kvyat will race in Formula 1 next year as the GP3 champion after claiming the title with a commanding victory in the first race in Abu Dhabi.

The Russian driver led from pole position and set the fastest lap on his way to a 4.6 second win – his third consecutive victory in GP3 Saturday races.

He came into the race three points behind Facu Regalia in the championship standings but the Argentine could only cross the line seventh having started ninth, meaning he could not catch Kvyat in Sunday’s race. He was subsequently given a 20 second penalty for failing to respect yellow flags or track limits, dropping him to 16th in the final results.

While third-placed Kevin Korjus was left stranded on the grid, Alexander Sims got a good launch from fourth to challenge Carlin team-mate Nick Yelloly into the first corner.

Yelloly was only able to hold on until lap nine when Sims got past at turn eight, scoring their fourth and third podiums of the season respectively.

Patric Niederhauser held fourth in the early stages until he was passed by Conor Daly at turn two. Carlos Sainz looked for a way through later on in that lap but the pair collided on the run to turn 11.

Jack Harvey benefited to take fifth ahead of Dean Stoneman who finished a fine sixth in his first single-seater race since fighting cancer. Tio Ellinas inherited seventh from Regalia with Patrick Kujala claiming eighth and the reverse grid pole position for Sunday. Sainz managed to continue with damage and came home ninth with Dino Zamparelli in tenth.