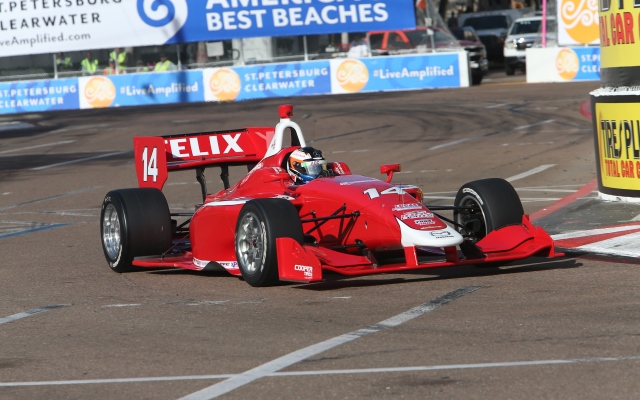 Felix Rosenqvist went wire-to-wire in a controlling performance Sunday morning to claim his first Indy Lights race victory for Belardi Auto Racing, in his second start in the series in St. Petersburg.

The reigning European Formula 3 champion took the victory from pole position and led all 45 laps en route to his first victory in North America, only threatened during the middle of the race while he was held up for several laps in slower traffic.

Looking as comfortable on the streets of St. Petersburg as he did in Macau or Pau, Rosenqvist picked up the Grand Slam by also setting the fastest lap of the race.

Kyle Kaiser?got a great start to the day, and finished second to finish the St. Petersburg weekend with podium finishes in both races. He scored two podium finishes throughout all of the 2015 season.

Kaiser?finished ahead of?Zach Veach,?in the second Belardi car, who took his first podium finish in Indy Lights since August 2014 at Sonoma Raceway in his comeback to racing after a year-long hiatus.

The race featured only two minor incidents. On the opening lap,?Shelby Blackstock collided with?Scott Hargrove, and collected?RC Enerson?shortly after. All three drivers continued on, despite Hargrove incurring minor suspension damage.

A promising day for Canadian rookie Zachary Claman DeMelo went for naught, as on Lap 11,?running in sixth, his car lost power at turn five.

With three laps to go, as Enerson was in a heated, race-long battle for ninth place with Schmidt Peterson Motorsports teammate?Scott Anderson,?Carlin rookie Neil Alberico tried to lunge up the inside of Enerson for tenth, only to crash into the back of Enerson. Alberico’s race ended in the tyre barriers, while Enerson sustained major rear-end damage.

Dean Stoneman climbed seven places from 13th to finish a solid sixth, ahead of?Ed Jones, who spun off trying to pass Negrao with nine laps remaining and conceded sixth to Stoneman.?Juan Piedrahita finished eighth, and Anderson held on to ninth after a hard-fought race with his teammate.

Dalton Kellett?capitalized on the last-laps incident between Enerson and Alberico to take tenth place.