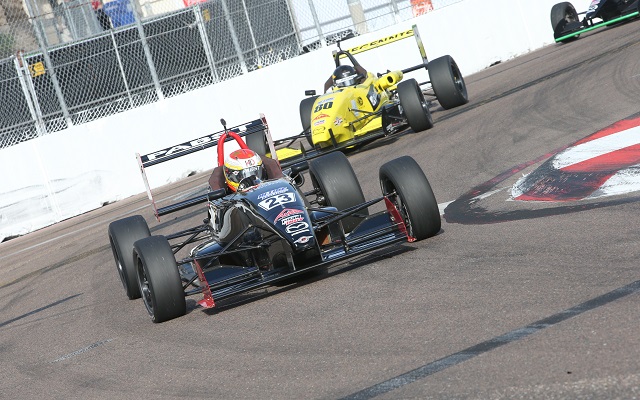 Yufeng Luo secured his maiden victory in USF2000 in the second St. Petersburg race with Jordan Lloyd completing another Pabst 1-2.

Luo took over the lead on the second?restart of the race, which was dominated by pole-sitter Lloyd prior to that.

Aside from the start of the race, Lloyd survived an extra restart after a caution stint in the beginning of the race, caused by an incident among James Munro, Anthony Martin and Victor Franzoni.

The reigning Australian F4 champion quickly pulled away from Parker Thompson but his lead of three seconds diminished when?a spin from Charles Finelli brought out the safety car.

Lloyd was unable to keep the lead on the restart, having been quickly overtaken by both Thompson and Luo.

However, the Canadian?failed to hold on to his newly-gained lead and dropped back to fourth before the end of the restart lap.

With just a handful of laps remaining, Luo made it home in the lead, the race finishing under caution after a crash involving Dakota Dickerson.

Lloyd had to settle for second and 14-year-old rookie Jordan Cane secured his maiden podium in third.

Thompson ended up fourth, ahead of Luke Gabin, Garth Rickards and Nikita Lastochkin.

Martin and Franzoni both recovered from their early crash to end up 10th and 12th.