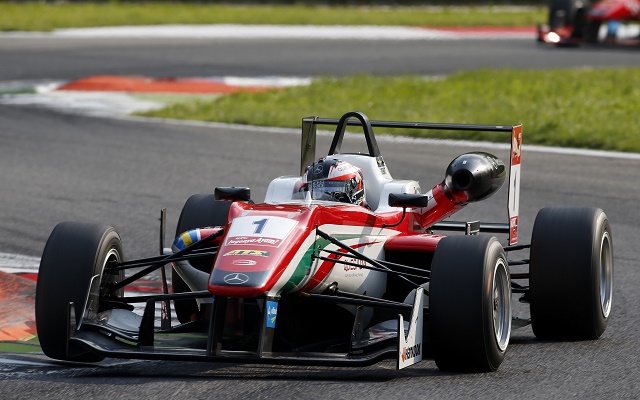 Prema Powerteam’s Felix Rosenqvist returned to the top step of the podium in an incident-filled first race of FIA F3’s fourth round at Monza.

Rosenqvist coped with pressure from rookie Mikkel Jensen to claim his third win of the season.

Santino Ferrucci was alongside the Swede on the front row and both got a good start, while Rosenqvist’s teammate Lance Stroll lunged into third.

Further down the pack, debutant Artur Janosz collected a stalled Markus Pommer, bringing out the race’s only safety car.

Rosenqvist was sublime at the restart, while Ferrucci suffered a huge lock-up into T1 and had to fend off from Stroll. But that allowed his teammate Jensen to pounce on the Canadian as he claimed third place.

The Dane then caught up with his American teammate and worked his way around him before setting out after Rosenqvist.

He made quick work of the Swede’s one-second gap, but made contact with Rosenqvist’s rear wing under braking and picked up a hole in his nosecone, which forced him to ease off.

Behind them, a charging Jake Dennis slipstreamed past Ferrucci on the main straight, taking the place before turn one. The American then locked up and went into the back of the Brit, wrecking his suspension while Dennis continued seemingly undamaged.

With Rosenqvist controlling the final minutes of the race, Dennis closed in on Jensen with a good shot of making it a Prema 1-2, but the Dane narrowly held on for second place and his first podium in the series.

Having started eighth, Antonio Giovinazzi had a race of ups and downs and was up to sixth with a lap to go. He went side by side with Stroll into turn one the final time around and ended up punting the Canadian into a spin.

The Carlin driver, however, continued unimpeded, storming to fourth place past Raoul Hyman. His main points rival Charles Leclerc also passed Hyman in the dying seconds to claim fifth – however, both his and Giovinazzi’s lengthy podium streaks were over.

Hyman settled for a solid sixth, scoring his first points in the series, ahead of Pietro Fittipaldi, who beat George Russell to seventh place.

Among the incidents further down the pack was Motopark’s Sergio Sette Camara collecting Matt Solomon under braking and Callum Ilott moving over on Mahaveer Raghunathan, which saw the Indian go into the barriers.

Signature’s Alex Albon, set to start from third place, was out of contention before the formation lap due to mechanical issues.