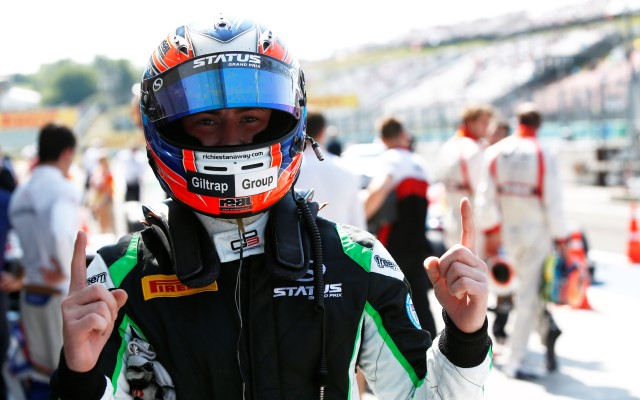 Richie Stanaway beat a late red flag to claim pole position in GP3 at the Hungaroring.

Dino Zamparelli had dominated much of the session, going nearly half a second clear with his effort during the first half of the session. He made a slight improved on his second run to extend his advantage, but it wouldn’t be enough to hold on to top spot.

Robert Visoiu was the first man to displace the ART racer, and he was quickly bettered by championship leader Alex Lynn, who had struggled to get a lap together up to that point but rose from 25th to first. His time on provisional pole did not last long though, as Stanaway went 0.035 seconds quicker.

That came just before a red flag with three minutes left on the clock after Roman de Beer and Alfonso Celis had simultaneous offs at turns four and five. Alex Fontana was on a flyer that could have challenged for pole position but the red flags came out just as he navigated the final corner.

Drivers were able to get one more flying lap in after the restart, but nobody could beat either first-time pole-sitter Stanaway or Lynn, who has qualified on the front row five times out of five so far in GP3.

Nick Yelloly was a late improver, climbing from seventh to third ahead of Visoiu and Zamparelli. Emil Bernstorff got up to sixth at the finish ahead of Patric Niederhauser, while Fontana was able to move up to eighth. Patrick Kujala was ninth, while Hockenheim winner Marvin Kirchhofer was tenth fastest.

The German ace will drop five places on the grid due to a penalty carried over from the last race, as will 11th-fastest man Luis Sa Silva for overtaking under red flags in practice. That will promote Jimmy Eriksson, currently second in the standings, into tenth on the grid.