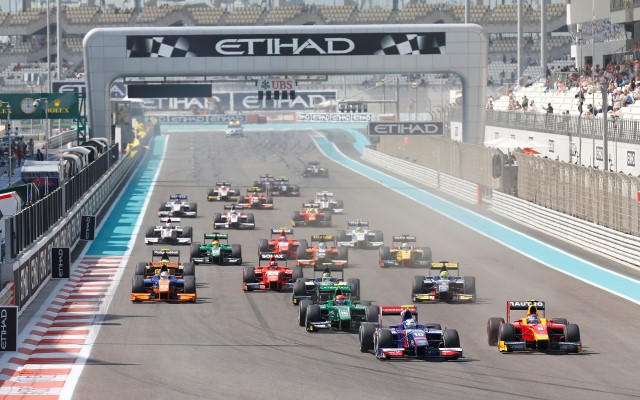 GP2 Series organisers have announced a change to the tyre rules as well as longer practice sessions ahead of the 2014 season.

Drivers will now be mandated to use both available tyre compounds during the feature race. This will bring to an end the practice seen during 2013 when some would only run the harder prime tyre compound during the feature race in order to maximise their result in that race, while sacrificing the shorter sprint race where they would have to survive on the softer of the two Pirelli compounds.

The change brings GP2 into line with Formula 1, where drivers must also run both available tyre compounds.

“Looking at how last season unfolded, we felt it was important that teams and drivers display their strategy over the course of both races,” said series chief Bruno Michel.

“Just like in Formula 1, during our Saturday race, each driver will have to use both tyre compounds. I am sure we will see some great racing and interesting strategies again this season with even more enthralling Sunday races.”

The single free practice session that opens each GP2 weekend will now last for 45 minutes rather than 30.

“I am very satisfied that we could extend free practice sessions to 45 minutes during race weekends,” said Michel.

“The additional track time will most definitely help our young drivers learn the circuit, giving them even better preparation for the qualifying session with no additional cost for the teams.”

Both the change to the tyre rules and the extension of free practice are common sense moves from GP2, but the series deserve credit anyhow for making them happen.

Last year we saw drivers who were not in title contention sacrifice sprint race performance to go for glory in the feature race. That helped drivers like Jolyon Palmer to claim victories while Fabio Leimer appeared to limp to his title, regularly finishing fourth on Saturdays.

GP2 should be all about seeing aspiring F1 drivers race each other on equal terms. This change allows that to happen while crucially still providing some, albeit limited, choice in terms of strategy. This should allow the outright fastest drivers in the championship to compete at the front for race wins, regardless of whether they have a title fight to worry about or not.

Importantly, GP2’s champions should hopefully be more convincing in their success than Leimer was able to be last year.

The lack of practice time has been a big problem and contributes to the bias towards experienced drivers, as rookies struggle to get up to speed in the limited track time. At 11 weekends last year, GP2 drivers got a total of 330 minutes – which their contemporaries in Formula Renault 3.5 get in less than three weekends with two one-hour sessions.

That not only offered awful value for money, but compromised another element that ought to be key to GP2 – learning. Arguably, extending it by only 15 minutes isn’t enough (particularly when so much of the Grand Prix timetable is given over to pit lane walks for the exclusive ‘Paddock Club’), but it’s a start. It also remains to be seen whether the strict tyre allocations and will actually enable drivers to do more laps given that extra time.