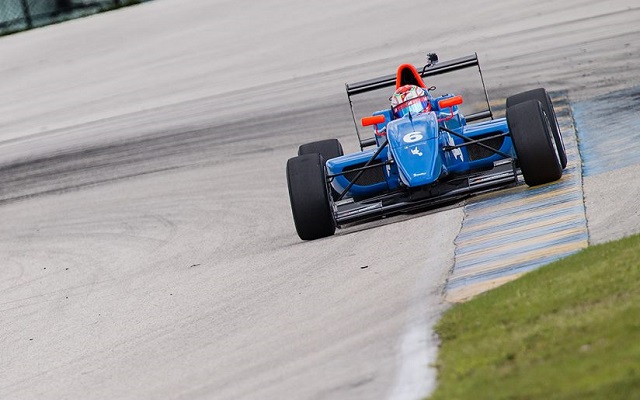 Fuoco emerged as the polesitter in the opening session which took place in changing conditions. The track was slowly drying for the entirety of the session and, as such, saw numerous changes at the top of the leaderboards.

Ed Jones led the session coming into the final six minutes when it was red-flagged due to Vasily Romanov hitting the wall. When the track went back to green flag conditions, Fuoco, Verstappen and Alex Bosak managed to improve the most right away and wound up fighting for pole. The Italian secured first, ahead of Bosak, with Raffaele Marciello pipping Verstappen for third.

Jones took fifth, ahead of Nicholas Latifi and Lance Stroll, with Dennis van de Laar and Tatiana Calderon in eighth and ninth respectively. Romanov and Takashi Kasai, who brought out the red flag early on, completed the running order.

The second session turned out a lot calmer and saw Verstappen confidently take pole in the final minutes. Latifi managed to move up to second shortly before the checkered flag, with Fuoco and Bosak taking up row two. Van de Laar took fifth, ahead of Marciello, who narrowly led Jones and Stroll. Calderon, Romanov and Kasai made up the rest of the field.