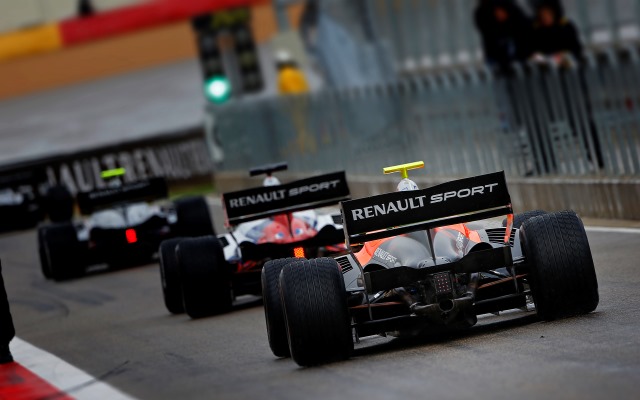 World Series by Renault released an extensive entry list for the post season Formula Renault 3.5 test at Aragon, filling out most of the seats that remained unannounced.

As previously revealed teams’ champions DAMS will field five drivers over the three days. Macau GP winner Alex Lynn will test on Wednesday and Thursday, joined by Zoel Amberg and Carlos Sainz respectively, with Norman Nato taking over alongside Sainz for the final day.

Fortec will field their rumoured 2014 driver Oliver Rowland for all three days, with Sergey Sirotkin testing in the second car with a yet to be announced driver. Fellow UK team Carlin will field an all-British lineup in Dean Stoneman, Matt Parry and Nick Yelloly.

Five different drivers will test for Arden Caterham, with an all British lineup of Jack Aitken and Will Buller on day one, Pierre Gasly and Amberg on day two and Raffaele Marciello alongside Amberg on day three. European F3 champion Marciello will also get two days with P1, with Will Stevens taking over for the final day and Matias Laine doing all six sessions in the other car.

Pietro Fantin, who raced for Arden in his rookie 3.5 year, will test all the days with Draco, joined by Mirko Bortolotti, Luca Ghiotto and Auto GP podium finisher Meindert van Buuren. Felix Rosenqvist, Jazeman Jaafar and Sirotkin have been confirmed for a day each with ISR.

Jaafar will also run with Tech 1 during the opening day alongside team protege Gasly. Lotus junior Marco Sorensen and Jordan Oon will take over on day two, with the latter replaced by Buller for Friday. Jake Dennis and Dennis Olsen have been confirmed for day one with SMP, with Nico Muller and Liam Venter doing the remainder of the test.

Antonio Fuoco will test for AV Formula in the Wednesday morning session, as Eurocup graduate Andrea Pizzitola will get the car for the rest of the test. Riccardo Agostini, Buller and Nikolay Martsenko have secured a day each in the other car.

Agostini will also do two days with another Spanish squad Pons Racing, with Kimiya Sato, Ghiotto and Matthieu Vaxiviere completing the lineup. Meanwhile, Martsenko and compatriot Roman Mavlanov will do three and six sessions with Zeta Corse respectively, with the remaining opportunities going to Sandy Stuvik and Oon.

Finally, Marlon Stockinger will do all the days with Lotus, joined by Esteban Ocon of Lotus F1’s Junior Team, Sato and Jaafar.