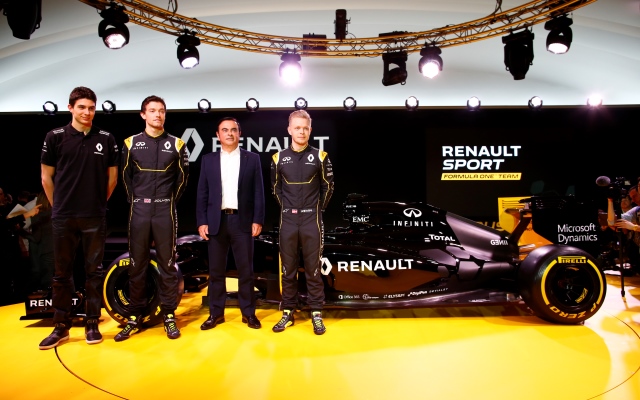 GP3 champion Esteban Ocon has been made reserve driver for the revived Renault Formula 1 team, while four drivers are part of a new academy setup.

The roles were announced as Renault launched its return as a works F1 team through the reacquisition of the Enstone-based Lotus squad at an event in Paris.

Ocon was present at the launch alongside race drivers Kevin Magnussen and Jolyon Palmer, the 2013 Formula Renault 3.5 and 2014 GP2 champions respectively.

Ocon signed a contract with Mercedes at the end of 2015 but is now believed to have been loaned out to Renault for this F1 role. Any race programme for the Frenchman this year has yet to be announced.

Rowland has been concurrently announced in a GP2 seat for the coming year with MP Motorsport.

Aitken and Jorg had GP3 deals with Arden and DAMS made public last week, while Deletraz had already secured Rowland’s former Fortec car in the series know known as Formula V8 3.5.

Frederic Vasseur, best known for his success as chief of junior single-seater powerhouse ART Grand Prix, has been made the head of Renault Sport Racing.

“The Renault Sport Academy underlines the commitment of Renault Sport Racing to nuture young talent to develop the Formula 1 stars of the future,” said Vasseur.

“The motivation is not just altruistic; we want these drivers to become future Formula 1 world champions and we are putting every tool at their disposal to achieve this aim.”

Renault said the academy will include an education programme in Paris, fitness evaluations at Enstone as well as pre-season and mid-season fitness camps, and an internship with the F1 team at Enstone.

Mia Sharizman Ismail, previously of the Caterham F1 team and its related junior activities, will manage the programme.