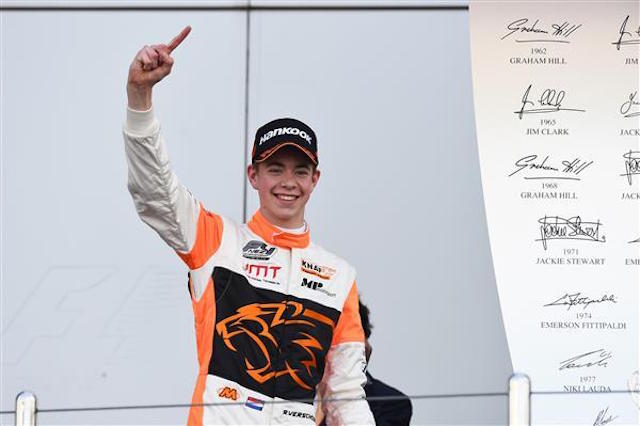 Red Bull has signed Richard Verschoor to its Junior Team programme after he made a winning start to his car racing career less than two weeks ago.

Dutch driver Verschoor, who only turned 15 last?December, won on his single-seater debut in the SMP Formula 4 Championship on the support bill for the Russian Grand Prix.

In addition to his SMP F4 programme -?which comes through the Dutch KNAF federation’s tie-up with the Russian-backed series – Verschoor will now contest selected ADAC F4 races with Motopark.

Last weekend he took part in the Italian F4 round at Adria and scored a podium finish.

Verschoor graduated from karting?after winning the 2014 CIK-FIA Academy Trophy and the 2015 German championship.

?It?s an amazing opportunity, a to go a lot further than you can on your own,” he said.

?We didn?t expect this and the possibility of taking a path to F1 wasn?t even the reason I started racing. I started karting because my dad worked so hard I didn?t see much of him and that was a way of doing something together and it worked out very well.?

Verschoor races on home soil at Zandvoort in SMP F4 this weekend, hoping to overturn a deficit to compatriot?Jarno Opmeer after an incident in the second race at Sochi.

?It?s nice to race at home, a lot of friends and supporters will be at Zandvoort, I?ve tested the F4 car there and that went well,” he said.

?I?m quite optimistic that we can do a really good job. I need to because I am 18 points behind in the championship.?