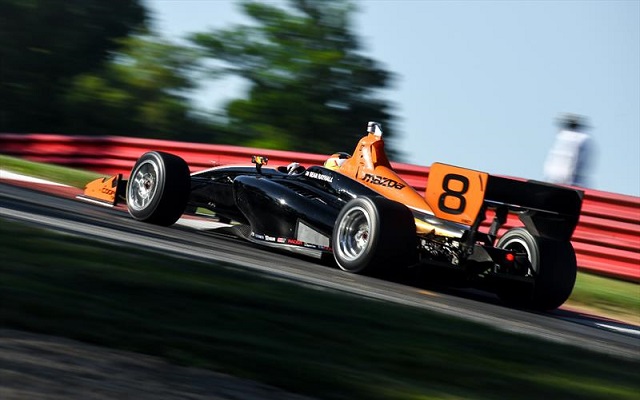 Sean Rayhall picked up victory on his return to Indy Lights after Ed Jones and Jack Harvey collided in race two at Mid-Ohio.

Jones had got the jump on pole-sitter Harvey at the start, at the championship leader soon found himself having to defend second from Felix Serralles.

The Puerto Rican’s attempt around the outside of Turn 4 saw him run out of road, before almost collecting Rayhall as he rejoined the circuit at Turn 5.

Further contact towards the back of the pack between Kyle Kaiser and Scott Anderson triggered the race’s only full course caution.

After the restart, Harvey put great pressure onto Jones but struggled to find a way past. The pair got very close into Turn 4, with Harvey locking up and appearing to touch the rear of the defending Jones, who in turn received a warning for blocking.

There was worse to come a few laps later at the same part of the track. Harvey again went to the inside but contact was made, spinning Jones around and sending Harvey through the gravel.

Rayhall inherited the lead, and looked comfortable for much of the remaining 20 minutes.

A sideways moment late on did allow Max Chilton to close to within a second, but Rayhall held on to take his second win of the year.

Rayhall and the 8 Star Motorsports squad only returned to the Lights field for Mid-Ohio after missing the previous three events.

The contact between Jones and Harvey enabled Spencer Pigot to finish in third after starting seventh, holding off race one winner RC Enerson.

Serralles finished fifth ahead of Shelby Blackstock, Ethan Ringel and Anderson. Juan Piedrahita retired to the pits after spinning into a tyre barrier.

Jones was given a drive-through penalty for causing the contact with Harvey, but managed to repass the Briton, who was struggling with front wing damage, to finish ninth.

Harvey will remain the championship leader going to the final round at Laguna Seca next month, but with a reduced advantage over Pigot of just six points.