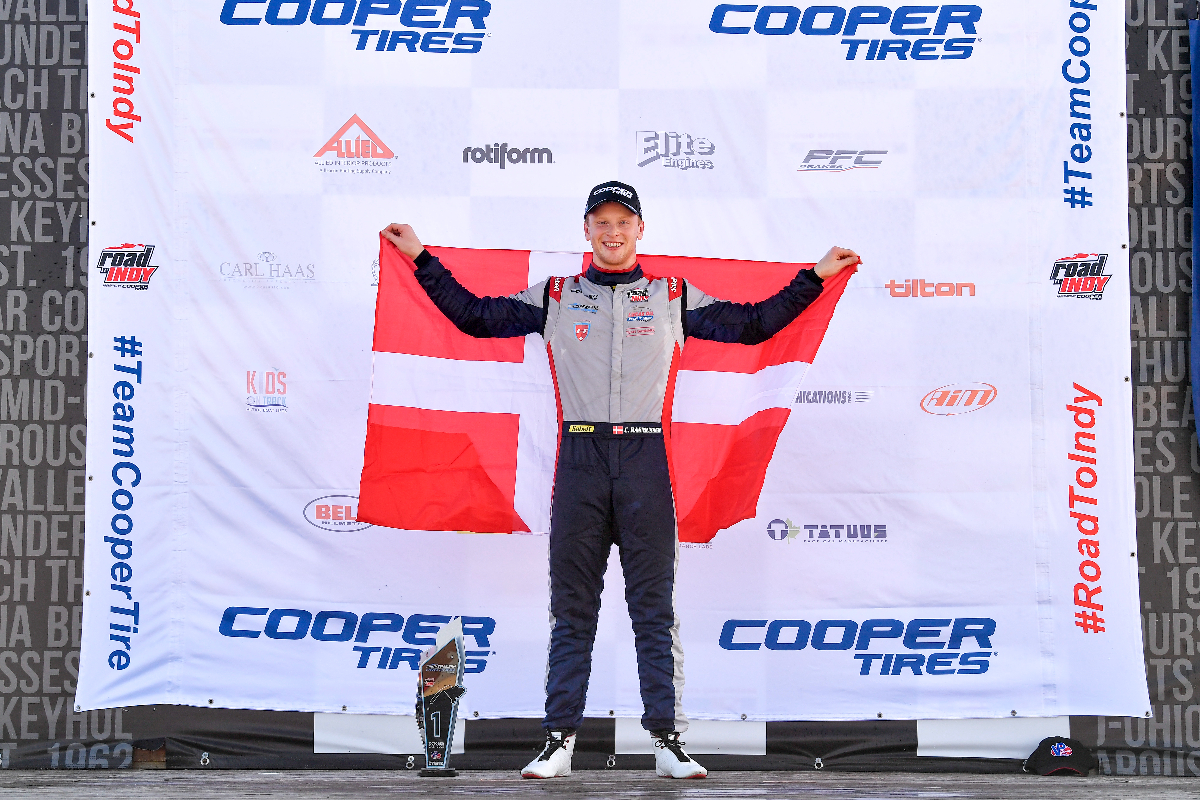 Rasmussen simply had to start the 25-lap race to secure the title. He skipped qualifying to avoid damaging the car, and he took to the start in 11th after a penalty for Miller Vinatieri Motorsports’ Jack William Miller for a collision in race one.

At the front, Exclusive Autosport’s Artem Petrov took the lead from third on the opening green flag lap, only to go off and slip down the order, while Pabst Racing’s Jordan Missig did similar and brought out a yellow as rain began to fall.

Both drivers were able to keep on the lead lap, leaving polesitter Hunter McElrea out front. On the restart, Exclusive’s Braden Eves went from third to first, passing Juncos Racing’s Enaam Ahmed and then McElrea.

Rasmussen, meanwhile, had worked his way into contention having climbed up to sixth, before another yellow was called as Missig had gone off, with Eves slipping behind Ahmed at the same time.

McElrea’s pace had dropped off at that point and he slipped behind Rasmussen, while Roe and Christian Brooks were now Ahmed’s pursuers.

When the race resumed once more, it didn’t take too long for Roe to get into the lead, as McElrea went off after a scrap with Miller as Eves dropped to sixth.

There was one final yellow as Juncos’s Reece Gold went off at turn one from ninth, as Abel Motorsports’ Jacob Abel and Missig were on slicks but out of contention.

Roe had to resist Ahmed at the end, but he was able to hold on for the win by a tiny margin, as Rasmussen and Miller scrapped over third. Petrov got by both and Brooks, only to lose out to Rasmussen right on the line for the final podium spot.

Petrov and Brooks rounded out the top five, while McElrea, Miller and JHDD’s Wyatt Brichacek were the next finishers.

Abel’s slick tyre gamble gave him the fastest lap and ninth ahead of Eves, Gold and Missig.