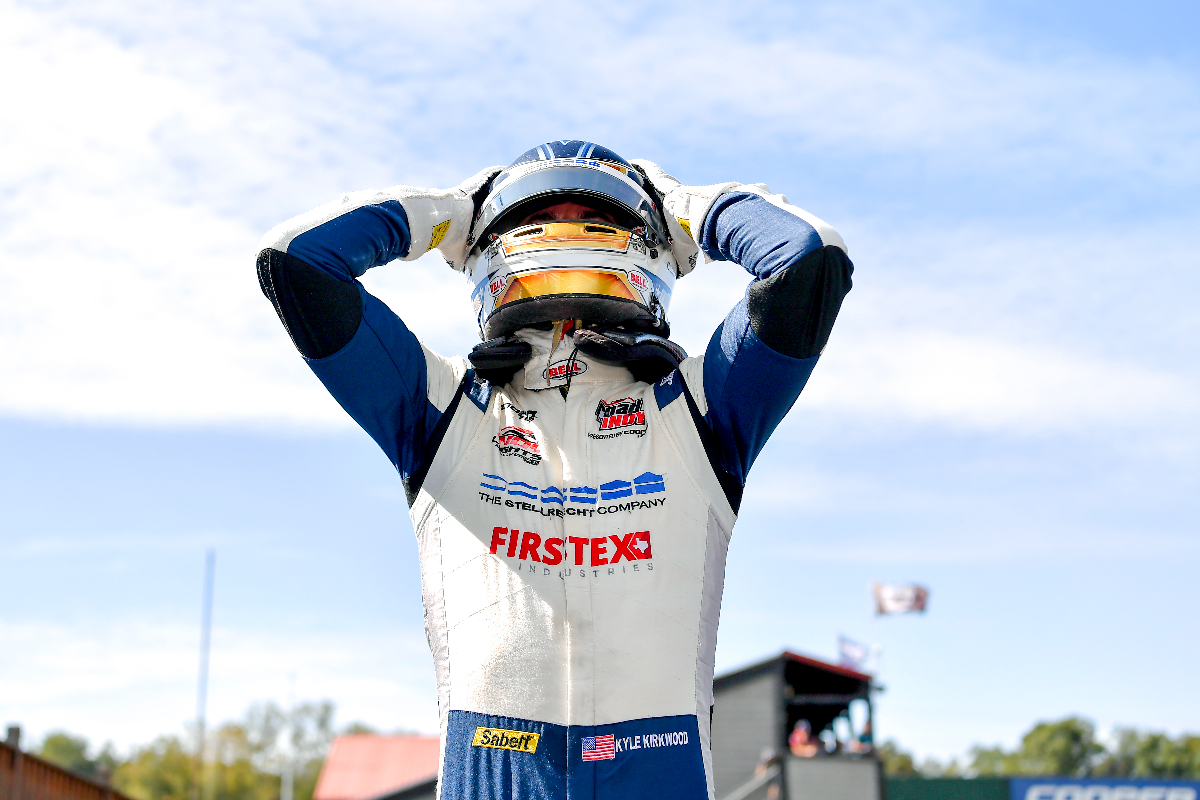 Kyle Kirkwood has completed his set of Road to Indy titles by winning the Indy Lights crown, as Linus Lundqvist dominated a wet Mid-Ohio season finale.

HMD Motorsports’ David Malukas came into the decider needing to win, lead every lap and hope Kirkwood was classified last but his job was made much more difficult when he went off at turn one on the first lap of green flag running.

He dropped to the rear of the field in a lap where Carlin with Jay Howard Driver Development’s Christian Bogle and Pserra Racing’s Antonio Serravalle also had issues and a caution period occurred.

Serravalle’s issue proved to be pivotal for the title, as he pitted on the restart. He then circulated for a few more laps, before pulling out of the race and ensuring Kirkwood would be classified no lower than 11th and therefore be champion.

There was another caution period before the race properly got going, as HMD’s Manuel Sulaiman spun off just as the field was coming to green flag running.

In his first wet Indy Lights race, Kirkwood had an uncharacteristically poor run – spinning and being overhauled by his team-mates and ultimately making little impression on the Global Racing Group with HMD cars in front.

Malukas, meanwhile, climbed from the back up into the podium spots, narrowly missing a spinning Rasmus Lindh on the way.

Out front, Lundqvist opened up a huge lead to team-mate Benjamin Pedersen to the point of 18 seconds in the first half of the 29-lap race that went to time rather than the 30 scheduled laps.

In the second half, Malukas made his way past Pedersen to take second, and the positions stayed that way until the end. Malukas did make a small dent into Lundqvist’s lead, but the Swede had him covered. The podium finishers were over a minute ahead of the rest of the field.

Devlin DeFrancesco was the top Andretti driver in fourth, ahead of Kirkwood who had only his second finish out of the top two since June and the first time he has raced at Mid-Ohio and not won.

Regardless, it was enough to clinch the title, even though he went off once more on the final lap. He finished ahead of Danial Frost, who dropped back late on.