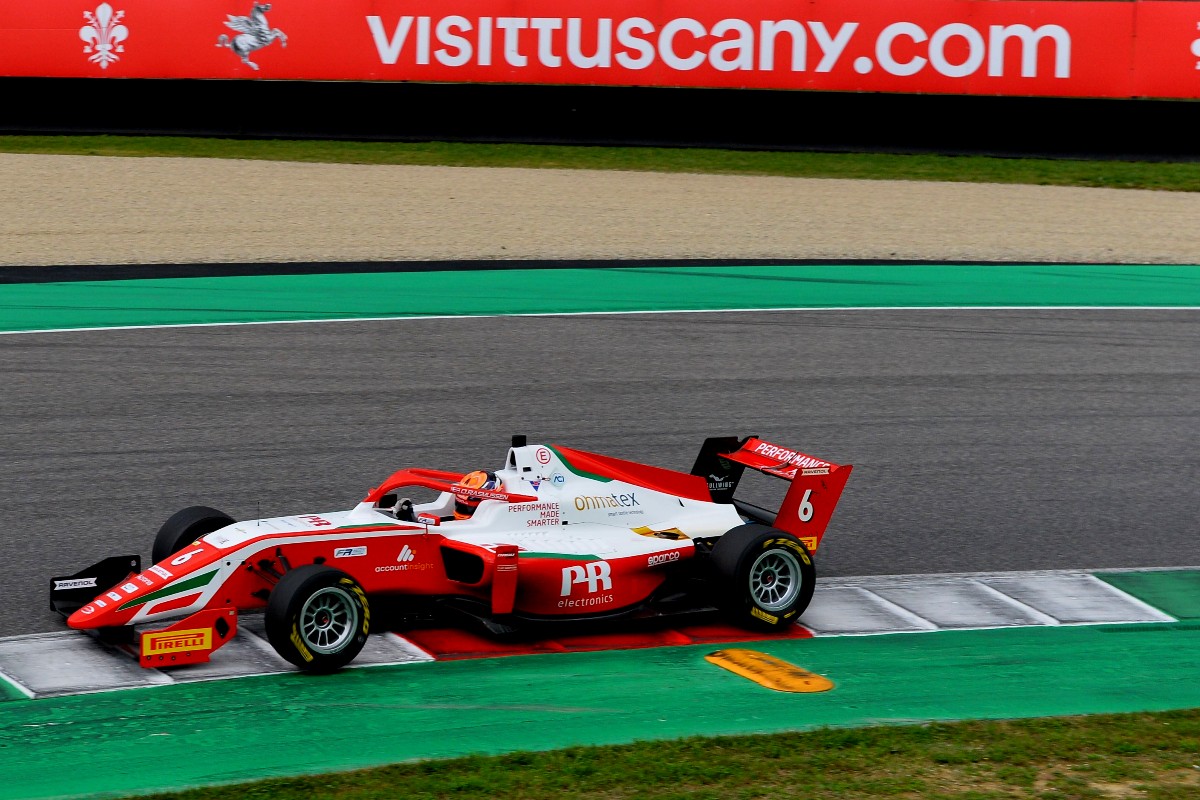 Oliver Rasmussen interrupted his Prema team-mates’ hold on Formula Regional European Championship poles this year in the wet at Mugello.

The Dane topped Q1, which was split in two by DR Formula’s Emidio Pesce crashing at Turn 4 and causing a red flag.

Arthur Leclerc set the early pace for Prema, by over 4.6 seconds at first, and it took a while before points-leading team-mate Gianluca Petecof came into the fray in second place as substantial gaps still covered the field.

Leclerc didn’t improve on his next two efforts, as the rest of the grid got a little closer to his pace. The gap across the top five has reduced to two seconds when Pesce crashed with four minutes to go, and when action resumed the track was drier.

Improvements started to appear in the final minute, and Rasmussen took provisional pole by a tenth of a second with four seconds left on the clock.

KIC Motorsport’s returning Juri Vips immediately surpassed that by 1.645s, and his team-mate Konsta Lappalainen improved in fifth. These three drivers, plus the late Petecof, crossed the line before the chequered flag came out, while the rest of their opposition mistimed their runs and ended up finishing a lap earlier than they wanted to as the surface condition improved.

Leclerc was first to fall foul of the clock and did improve but down in fourth place, while Patrik Pasma (KIC) and Pierre-Louis Chovet (Van Amersfoort Racing) went fifth and sixth behind him.

An awful first sector meant that Petecof didn’t maximise the advantage of the drying track and could then only qualify fifth, while Rasmussen reclaimed pole with a 2m00.084s. Vips crossed the line a moment later and was just 0.036s slower.

Caught out by the red flag, and his own spin afterwards, was Monolite Racing’s Andrea Cola. The Italian was 14s off the pace, and deemed a non-qualifier.

Rasmussen started where he left off in Q2, immediately lapping sub-2m00s. He wasn’t bettered for some time, but Leclerc eventually outpaced him.

The Dane responded to go back on top by a tenth of a second, before Leclerc went half a second clear with seconds left to run to take his fifth pole of the season.

Petecof was 1.314s back in third, while Vips was 5.064s slower in ninth and Gillian Henrion missed the session entirely.

Leclerc leads Rasmussen and Petecof again on the race three grid based on second-best times across the two sessions. Vips moves up to eighth ahead of Jamie Chadwick courtesy of his Q1 performance.