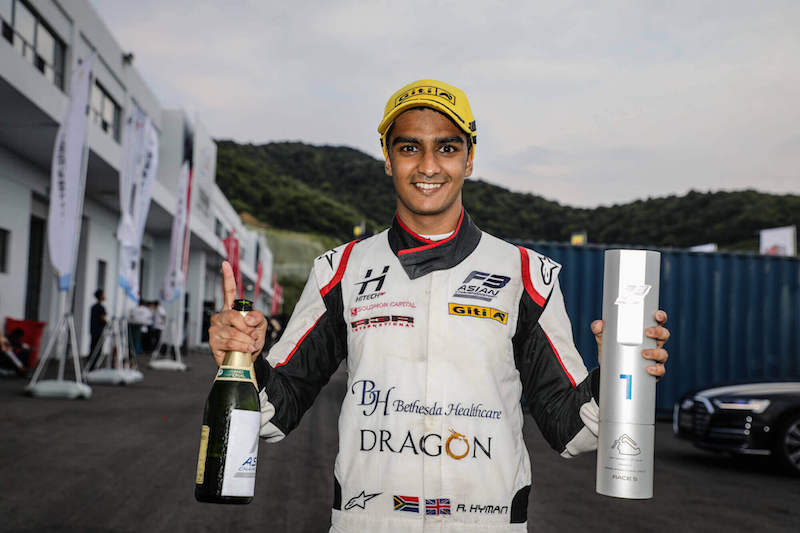 Hyman, who clinched the Asian F3 crown by two points at the final race of the season in Sepang, is aiming to scoop the maximum seven FIA superlicence points available for winning TRS – a new addition for the 2019 season.

He’ll compete alongside a trio of fellow TRS rookies at Giles, the team which took Clement Novalak to fifth in the drivers’ championship last year. Hyman will be joined by Italian F4 rookie champion Petr Ptacek, Australian F4 driver Thomas Smith and American racer Dev Gore, who competed in the second half of last year’s Euroformula?Open championship.

“My aim is to be fighting at the front from the outset,” he said. “I?ll have to learn five new circuits as well as the car, but I?m looking forward to the challenge. It?s the ideal preparation for me ahead of the 2019 racing season.”

The BRDC Rising Star began his car racing career in the BRDC F4 championship, finishing third to 2019 F1 rookie George Russell in his second year in the series before he switched to European Formula 3 in 2015.

After a partial campaign in 2016, he returned to racing full-time in GP3 with Campos the following year, where he won the reverse-grid race in Austria and finished 13th in the drivers’ championship.

Finishing his University degree in the first half of 2018, his attention then switched to Asian F3 where he triumphed over Jake Hughes, who was forced to miss two rounds due to his GP3 commitments.

When speaking to Formula Scout, Hyman identified?Lucas Auer and Liam Lawson as the main competition among the drivers already confirmed. Auer is a DTM race-winner returning to single-seaters and using TRS as a learning step before competing full-time in Super Formula this year.

Sixteen-year-old Lawson shocked the Asian F3 paddock when he won all three races of his one-off weekend appearance at the season finale in Sepang.

Hyman is the 14th driver confirmed for the series, with at least two more drivers to be announced by the opening round, which will bring the total up to 16, the amount needed for full FIA Super Licence points to be awarded.

The 2019?TRS season kicks off with the first of five successive weekends at Highlands Motorsport Park on January 10-13.