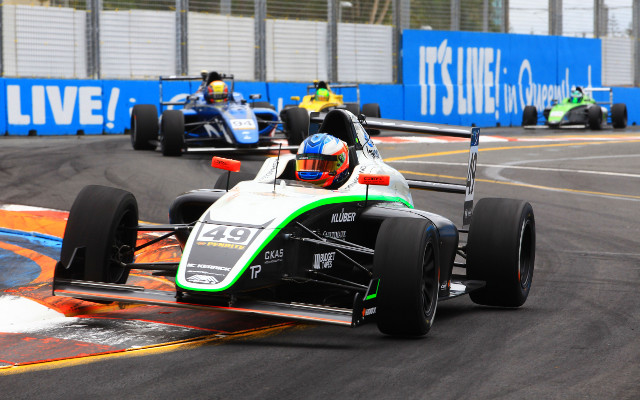 Thomas Randle led the third and final Australian Formula 4 race in Surfers Paradise from start to finish to complete a triple win and keep up his championship challenge.

Starting from pole position, Randle led all of the 15 laps and set the fastest lap.

Leeds had started second on the grid but was beaten off the line by championship leader Jordan Lloyd, but he was able to stick with the BRM driver as Randle pulled into the distance.

He was still on Lloyd’s tail on the final lap and managed to pull of a move around the outside of the very final corner as Lloyd got a slow exit, and just 46 thousandths separated the duo at the line.

After a hat-trick of his own last time out at Sandown, Lloyd has now had his advantage over Randle slashed from 70 to 39 points with rounds at Philip Island and in Sydney remaining.

Will Brown survived contact with his AGI Sport team-mate Jimmy Vernon to take fourth. The clash exiting Turn 4 after Brown had gone down the inside led to Vernon pitting for a new front wing and finishing a lap down in 10th.

Harry Hayek took fifth ahead of Zane Goddard and Frankie Maiolo with Tom Grech eighth in front of Jordan McGregor.