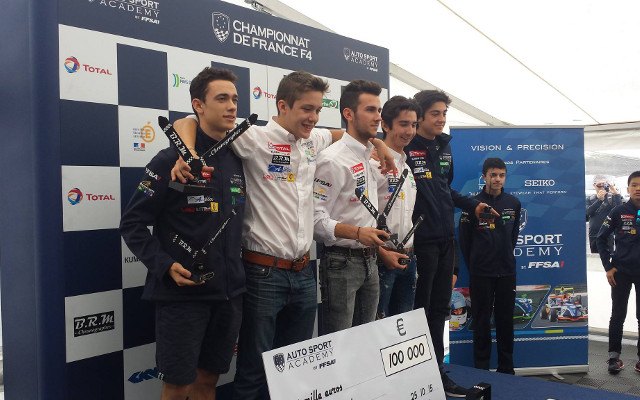 Newly-crowned French Formula 4 champion?Valentin Moineault wrapped up the season with his eighth victory in the final race at Paul Ricard.

After winning the opening race of the weekend on Saturday to secure the title, Moineault led from pole position to chequered flag again in the finale as he completed his third double triumph from the last four rounds.

He finished three seconds ahead of Simo Laaksonen, who came through from fourth on the grid to take second.

To do so he had to overtake the two drivers battling over second in the standings. The Finn got ahead of Gabriel Aubry on the opening lap before taking Sacha Fenestraz on lap eight despite contact in the process.

Fenestraz held off Aubry for third at the line, which was more than enough for the former to retain second in the standings ahead of his fellow rookie.

Axel Matus leapt from ninth to fifth on the first lap and held the position until the end despite a late charge from Julien Darras, who had started 12th.

Failing to beat the Mexican meant that Darras could not overhaul Giuliano Alesi for fourth in the standings. The son of Jean climbed to sixth on lap one but was then eliminated in contact with Alexey Korneev, though he held onto his championship position by a point and a half.

Rueben Kressner held off Julien Andlauer and debutant Hugo Chevalier at the line for seventh, with Nerses Isaakyan 10th.