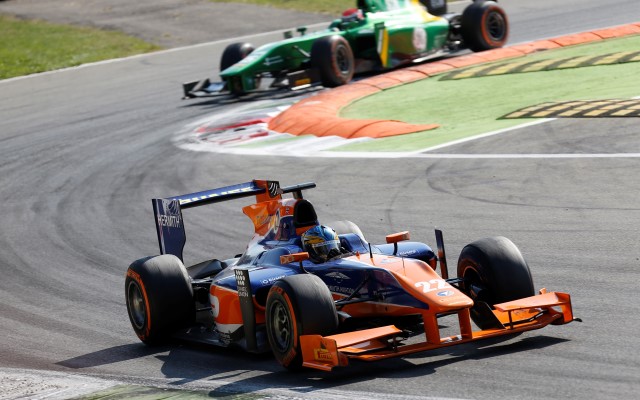 Adrian Quaife-Hobbs produced a controlled drive to record his first GP2 win in the sprint race at Monza.

From second on the grid, Quaife-Hobbs moved into the lead off the start as pole-sitter Alexander Rossi bogged down and third-placed James Calado failed to get away at all.

The Hilmer driver survived a brief rain shower and some late pressure from Rossi to win by 1.8 seconds.

Rossi’s poor start relegated him to fourth behind Julian Leal and Sam Bird but the American was able to capitalise when the pair both ran on at the first chicane during the slippery phase and pull past into second place.

Leal collected his second consecutive sprint race podium in third ahead of Russian Time duo Bird and Tom Dillmann. Fabio Leimer finished sixth and claimed the two bonus points for fastest lap on the very last lap, meaning he only lost two points relative to Bird and takes a six point margin onto the next round in Singapore.

Stefano Coletti and Felipe Nasr once again failed to score – Coletti for the ninth time in ten races – as they had a race-long duel outside of the points, finishing 12th and 13th. They are now 24 and 29 points respectively behind Leimer while Calado – who finished two laps down after a failed gamble on wet tyres – is 40 points off the lead.

Rio Haryanto and Johnny Cecotto completed the points, the latter holding onto eighth under late pressure from Dani Clos.