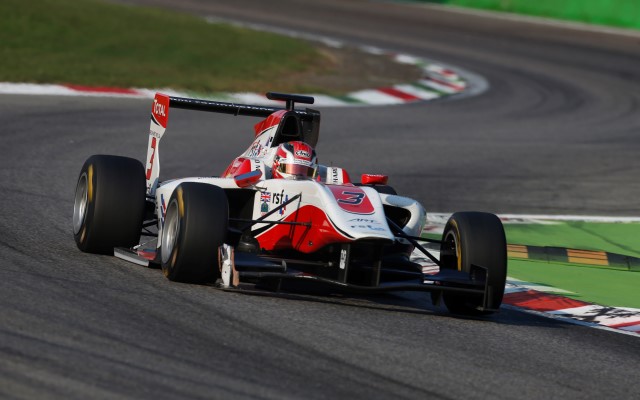 Jack Harvey scooped his second win of the GP3 campaign as he led race two in Monza from lights-to-flag.

Lewis Williamson closed to within 0.6 seconds with three laps to go after Harvey ran wide exiting the second chicane, but Williamson then made an error and fell into the clutches of Saturday winner Daniil Kvyat who came through to finish second from eighth on the grid.

Points leader Facu Regalia had got up into second place behind ART team-mate Harvey after an early safety car intervention but was passed by Williamson and later Kvyat. His fourth place finish keeps him at the top of the standings, with Kvyat now seven points behind ahead of the final round in Abu Dhabi in November.

Kevin Korjus was fifth ahead of Alexander Sims and Melville McKee, while Conor Daly claimed eighth place from Carlos Sainz on the last lap having started from the penultimate row after being forced into retirement in yesterday’s first corner incident.

There was more chaos at the start of race two, with pole-sitter Patric Niederhauser stalling and being collected by his unsighted Jenzer team-mate Alex Fontana. The contact sent debris into the air including a tyre, which was fortunately stopped from leaving the circuit by the high catch fencing.

There was some more carnage in the braking zone for the first chicane with Ryan Cullen clipping David Fumanelli and then helplessly taking out Giovanni Venturini.