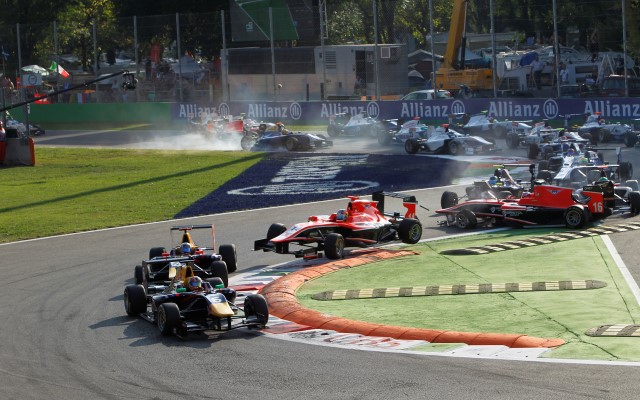 Dino Zamparelli has been suspended from the second GP3 race in Monza after causing the first corner incident in race one.

Zamparelli turned right onto the grass in the braking zone for the chicane before rejoining the track and colliding with his title-contending team-mate Tio Ellinas, putting him out of the race and triggering a chain reaction that impacted on the races of a number of other drivers including Conor Daly, Robert Visoiu and Carlos Sainz.

According to a GP3 statement, the stewards “deemed he made a serious breach of the regulations which had the potential to cause injury to others. Stewards had evidence Zamparelli had left the track deliberately and re-joined the track, colliding with another three cars.”

Luis Sa Silva was handed a five-place grid drop for Sunday’s race after a later incident at the same corner in which he hit the rear of Ryan Cullen‘s car, ending both their races.

Gounon doubles up at Magny-Cours