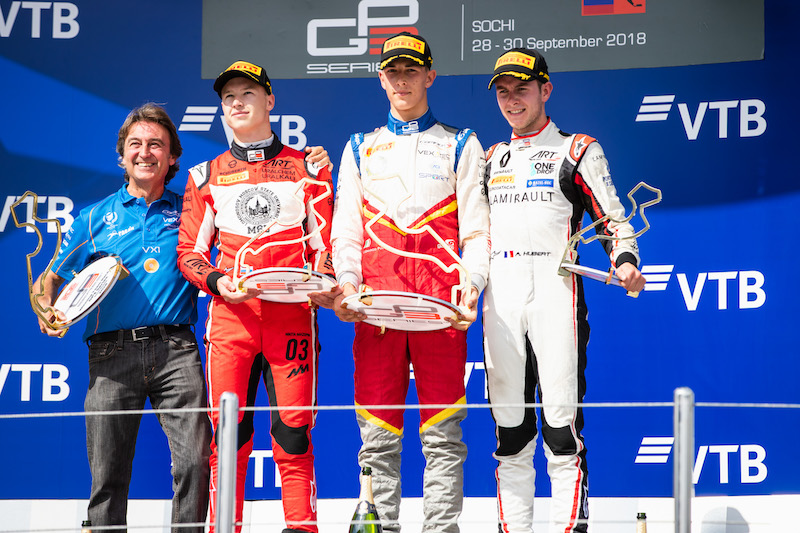 Leonardo Pulcini claimed his maiden GP3 victory in the first race at Sochi, as Nikita Mazepin fought back from being stripped of pole position by snatching second from title rival Anthoine Hubert on the last lap.

Mazepin’s breach of track limits pushed him back to eighth on the grid and gave Pulcini his second pole of the season, but the Campos driver had to deal with a three-pronged attack at the start from Callum Ilott, Giuliano Alesi and Hubert.

Pulcini managed to keep the lead, despite going off at Turn 2 and needing to follow the prescribed route back to the track.

He then quickly built a two-second advantage and was never challenged, managing to stretch his lead to almost four seconds late on.

Hubert drove around the outside of Ilott in the long Turn 3 left-hander to grab second place on lap five of 20, and looked set to finish there with five laps to go with a three-second advantage over ART team-mate Mazepin.

Mazepin upped his speed late on however, attacking Hubert into Turn 13 on the penultimate lap, with the Frenchman braking late on the inside line to keep the place.

Hubert had no answer to Mazepin breezing past on the run into Turn 2 on the final lap, with Mazepin’s fastest lap helping him to cut his deficit to Hubert at the top of the standings to 24 points.

Mazepin had nearly run into Ryan Tveter at Turn 2 at the start of the race and he had to take to the escape road, rejoining in fifth as Tveter then collided with Simo Laaksonen at the apex.

He went off-track at the same point when he caught the battle between Ilott and Alesi over third. After slipstreaming past Alesi, he got a run on team-mate Ilott but cut the Turn 2 apex to avoid contact. Ilott ended up going deep in avoidance, falling behind both Alesi and Mazepin, who successfully took third away from the Trident driver a lap later.

Richard Verschoor finished close behind Mazepin and Hubert as he took fourth on only his fifth GP3 start.

The MP Motorsport driver, who won in Sochi on his Formula 4 debut in 2016 to catch the eye of Red Bull, passed Jake Hughes at half-distance after attacking around the outside into Turn 2, running all four wheels beyond the exit kerb in the process.

Spa and Monza winner David Beckmann started 15th after his engine expired in qualifying, but drove a strong recovery to fifth ahead of Laaksonen and Hughes, whose seventh place contributed to ART wrapping up its eighth teams’ title in the championship’s nine-year history.

Ilott quickly fell back to eighth place, and although he then spent some time defending the place and reversed-grid pole from Juan Manuel Correa, he didn’t have any answer to Joey Mawson once the Arden driver passed Correa. Ilott ended up 13th, one place ahead of Alesi.