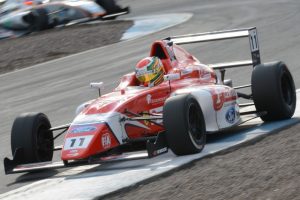 The Guernsey native won on British F4’s last visit to Brands Hatch on the Indy layout, and marked his return with a near double pole.

He set his fastest lap right at the end, toppling Fortec Motorsport’s Johnathan Hoggard from top spot by 0.074 seconds. Hoggard’s second best lap was marginally better than Priaulx’s though, meaning he will line up from pole for the final race of the weekend.

Double R Racing’s Paavo Tonteri threatened both of them at the top, and was the early pacesetter, but failed to improve late on and ended up in third place, two tenths of a second behind.

Priaulx’s team-mate Patrik Pasma was fourth, another challenger for pole but guilty of breaking track limits and having his best time deleted on occasion.

Title rivals Kiern Jewiss and Ayrton Simmons battled over fifth, with Jewiss sliding down the order as the session went on and Simmons going the other way. They were separated by just 0.01 seconds on second best times, with Jewiss starting ahead on both grids. To keep the title fight going, JHR Developments driver Simmons has to finish fourth in the first race of the weekend as an absolute minimum, even if Double R’s Jewiss scores no points.